A Bit of Dog/Runner Problem on the Bog Road - Augusta

Yesterday when I was driving home from Planet Fitness and turned from Outer Civic Center Drive onto the Bog Road and saw a runner in a bright orange jacket running on the one-way section going up to the stop sign. 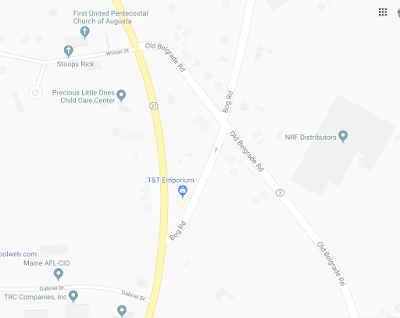 She saw the traffic coming up behind her and moved over to the left side of the road just after the little store there and as she was moving over, I could see three dogs (a German Shepard, a very large dog (it looked something like a Mastiff and another one) running free in the yard behind the store. The runner was heading in their direction and as she got closer the dogs began coming down the hill towards her.

The biggest one was in the lead and I could tell that the runner was starting to get scared, she was looking around to see where traffic was. There was one vehicle in front of me and a few behind me. So I slowed down to let her cross in front of me if she decided to.

Suddenly the biggest dog and the German Shepard started to run faster at her. From their body language and the way they were running at her, it appeared to me that they were not going to be all that friendly. I was within 10-15 yards of the runner so I turned my truck toward the side of the road and started laying on the horn.

It startled the runner, who had stopped running and the dogs veered off their approach to the road. I motioned the runner to get on the other side of my truck and I kept laying on the horn. The dogs came out into the road but backed off with the horn blaring, I kept my truck between them and the runner.

While I was doing this another driver in a Prius passed me on the right side almost hitting the runner who had thankfully moved to the other side of the road. Stoopid shit - the other driver, she was in too big a hurry to slow down and make sure another human being was safe - I guess.

Anyway, the dogs continued to track on the side of the road all the way up to the Stop sign and I drove slowly enough to stay between them and the runner. Once she got to the top of the little hill there she turned towards NRF and kept running down the road. I double-checked to see what the dogs were doing and they had moved back up into their yard and were not following.

Crisis averted and it could have been a bad one.

At no time did I see anyone come out of the house to do anything about the dogs. Which bothered me even more, because I am sure that they must have heard my horn blaring, must have wondered if their dogs were the reason.

Now I am not writing this to claim how heroic I was or anything like that, because I was safely inside of my truck and was in zero danger from those dogs. However, I do feel sorry for that runner who was more than likely scared shitless by the actions of the dogs. I know that I hate it when I am running and get accosted by dogs like that.

You can say what you want about the dogs being in their yard, that they were just playing and that it was the responsibility of the runner to stay away from their yard.

It is the responsibility of the dog's owner(s) to keep their dogs in their yard under voice control, on a lead or secured by other means to ensure that their dogs do not accost or possibly harm passerby's on a public road. If that large dog (Mastiff), German Shepard and the other dog had attacked that runner as a pack, it would have been a very bad situation for everyone.

I am just glad that it turned out to be only a minor inconvenience for the runner and nothing more this time. However, I run in that area quite a bit and have had an encounter with the Shepard before, so this is not an isolated incident. I know that the dogs are there, so I tend to make sure that I run on the other side of the road until I am through that area.

Hopefully, no future issues happen with those dogs running unsupervised in that yard, but...based on what I saw yesterday and with the increasing amount of foot traffic out in that part of Augusta, it is going to be a question of when something happens more than if - if the dogs are not supervised or secured.

I hope that I am wrong.

This post was written for and first appeared on One Foot In Reality.
running
Hshawjr207
Welcome to One Foot In Reality. This blog will be my daily journal where I get to write about things that interest me like running, technology, aging and a lot about what I do and read about over the course of a day. Some things might be boring, but they are a part of everyone's life, but also the parts that make me go mmmm.

CheerfulMonk said…
I'm so glad you were there to help. Is there somewhere you can report the dogs' owner? I'm sure here they would be breaking a law.
January 15, 2020 at 9:22 PM

Hshawjr207 said…
Yeah, I have a couple of contacts that I plan to talk to about it and copied the local PD on their Twitter feed, which I know they look at daily. I have a feeling that this is not the first time there have been complaints about the dogs in that area.
January 15, 2020 at 9:27 PM