on January 18, 2020
This morning started out at -5*F, yeah negative numbers on the donut, but Bennie didn't seem too bothered by it - well at first. About 100 yards up the road, he suddenly developed a bad limp in his back left leg, which miraculously stopped bothering him once we turned around. When he starts the fake exaggerated limping, I get the message that he wants to turn around. 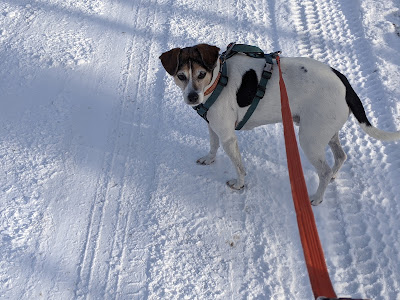 On his second walk we did the full mile even though it was still only about 2*F, without the wind it isn't really bad, but it was still cold. Bennie was a real trooper and seemed to enjoy being outside even though it was that cold out. However, by the time we got back he was shivering pretty good, so going any further was not an option even though he pulled a little to keep going up the road. I forced the right turn into the driveway.

However, I was very impressed by my Pixel 3a's camera as you can see by the two photos below. I have always liked the old VW van in the field down-back, but couldn't believe how clear the zoom was.

Once we got back to the house, I made sure that Bennie warmed up and stopped shivering, then I decided to go for a run.

Since we had to leave in about an hour, I didn't have time to go into the gym in Augusta and run on the treadmill, so I bundled up and headed out the door. The temp according to our thermometer was 4*F and with that slight breeze -- yeah, it was slightly chilly.

The biggest problem really wasn't the cold, it was the footing on the road, it was more ice than the road, so I just went slow, which was really a good thing, because the hamstring and left leg really wasn't grumbling, but never loosened up either. 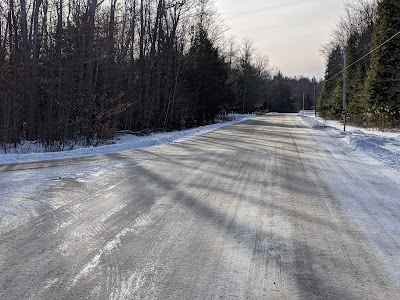 Somehow in spite of everything, I managed to get 2.0 miles done. 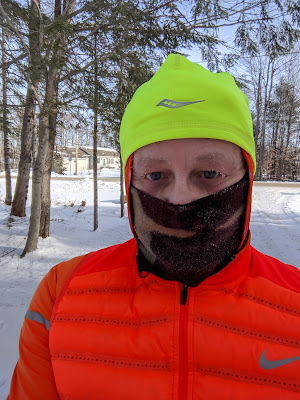 I was starting to develop the icicles on the eyelashes and while I didn't really feel cold, I wasn't warming up either, so it was time to shut it down and get cleaned up.

We had to drive over an hour to attend a Celebration of Life for our neighbor who passed away in December. It is tough going to those kinds of things when the only person there that you know is the spouse of the deceased person. We paid our respects, looked at the memorial and watched the slide show and quietly left.

It is a sad thing, but the right thing to do.

When we got home Bennie got another mile walk in and then I got on the elliptical for a quick 4.0 miles on that beast. I am going to start doing that most evenings after his last walk. I just feel that I need a bit more work than I have been getting since the hamstring issue began. The elliptical does not bother my hamstring, so I can see some quality time on that, while things continue to heal up.

As I look out the window while writing this, there is about an inch of snow already, so I imagine that the 6-10 inches of snow that is predicted tonight will end up at the higher end of the range in the land that the weather never forgets.


This post was written for and first appeared on One Foot In Reality.
daily life RunLog
Hshawjr207
Welcome to One Foot In Reality. This blog will be my daily journal where I get to write about things that interest me like running, technology, aging and a lot about what I do and read about over the course of a day. Some things might be boring, but they are a part of everyone's life, but also the parts that make me go mmmm.

Hshawjr207 said…
Thanks, sometime I think it is more foolishness than perseverance, but the wife sets a good example for me and makes me get out the door more often than not. :-)
January 19, 2020 at 8:50 AM

PrairieAdventure said…
Running in the cold can be a delight. It's always a challenge though! You're giving me a lot of motivation Chief and I appreciate it. :-)
January 19, 2020 at 4:16 PM