on January 11, 2020
Well, let's get back to a little more normal blogging after I screwed up and deleted my Aging-My Thoughts blog URL earlier today. You can read more about that here. I am chuckling now and it will take 2-3 weeks to get back to where I was this morning. So it is okay if you laugh with me about it.

Bennie and I did the full morning walk for the first time (we slept in and it was light out), in a while and then later we walked down back for his long walk.

After the expected ice storm tonight, I don't think we will be walking down-back for a while. Even this morning with the warmer temps, walking down there was getting a bit dicey as the snow was melting and the ice underneath was re-appearing. 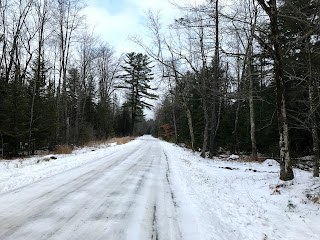 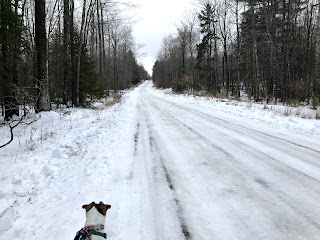 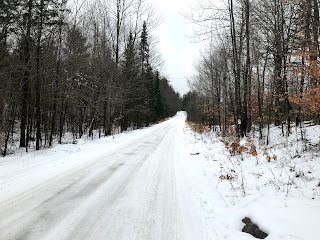 
Jon one of my running buddies made a very unexpected and generous offer this morning. He has been battling back issues and offered to transfer his bib to me for the Cape Elizabeth Mid Winter 10 Miler. It is a race that I have never run and when I attempted to register this year, I was too late. So this was something that I really, really appreciated and wanted to do. I have had my name on the waiting list, but haven't been contacted.

Unfortunately, last Tuesday I got stoopid and did a workout that was beyond my current fitness level and strained my left hamstring. However, before giving Jon my final answer, I wanted to try to run this morning to see how the hamstring felt.


Initially, it felt pretty good, however as I closed in on the 1.0-mile mark, the hamstring was not impressed and let me know in no uncertain terms to stop running or face the consequences. So I stopped at 1.0 mile.

As much as I wanted to tell Jon I would love the bib number, I had to decline.

My experience with this kind of hamstring strain is that it takes 2-4 weeks to get back to running without any issues and the race is on February 2nd, about 3 weeks away. If I had accepted the transfer, I would have pushed to get back and ready for a 10-mile road race that has a few bumps in it. I would not have been ready and probably would have just re-injured myself attempting to get race-ready.

Which sucked and I said as much to Jon and thanked him profusely for his generous offer.

Sometimes things just do not work out the way you want.


After lunch, I puttered around the house and got things ready for the predicted ice storm. Of all the storms that we get up here in Maine, I think I hate the ice storms the worst.

We do usually lose power and with that, it means having the generator and gas cans filled, especially if the power will be out for extended periods. So I started it up, made sure I had the procedures in my mind again and let it run for a couple of minutes. Everything worked great and then I headed down and filled up two 5 gallon gas cans.

The wood stove is set up so that all we have to do is light it.

We are about as ready as we will be.

Now let's just hope that we only get the rain part of the storm and that the freezing rain and ice stay away.


Overall, it wasn't a great day and having to turn down Jon's offer was hard, but I did talk it over with Mary and she agreed that it was the best decision. She has more common sense when it comes to my running, running with injuries and how long it takes me to recover from them than I do. Sometimes I need that unbiased opinion to help me make the correct choice.

The other part was me deleting my new blog was just a case of me making a mistake and not being able to stop my fingers from hitting enter and knowing immediately what I had done.

We should have some interesting photos tomorrow of the ice storm because I still will have to walk Bennie.

This post was written for and first appeared on One Foot In Reality.
daily life reflection RunLog
Hshawjr207
Welcome to One Foot In Reality. This blog will be my daily journal where I get to write about things that interest me like running, technology, aging and a lot about what I do and read about over the course of a day. Some things might be boring, but they are a part of everyone's life, but also the parts that make me go mmmm.

Unknown said…
Wow that is a great offer! But sometimes you need to leave an offer like that on the table. At least it was not the worse situation, where you had signed-up and couldn't run it.

I am replying to a few other posts here as well, Harold, since that way I only have to fill out the form once :-)

But sorry that you accidentally deleted that URL! That's not fun! I can see how you could find a way to chuckle about it, since there's really no point in doing much else. Does this mean you have no access to anything that was on that site? Hope it works out! It means, of course, that I couldn't read the post you linked in your 2019 recap... which is what I wanted to comment on next.

I'm sorry to read about your father. I'm sure his passing was hard for you, and continues to be hard, but the memory of him lives on, no less in this blog. Thank you for introducing him to us, and may he rest in peace.

Finally, I have enjoyed the development of your blog (you keep things interesting, to say the least), and I look forward to reading every so often as I can while I finish up my PhD. Sorry I haven't been around much, but Happy new year!
January 12, 2020 at 6:45 AM

Hshawjr207 said…
Thank you, You have been busy too and now that your run streak is over, you are branching out to do more than just run from what I am seeing on Strava. I am going to work on all the links today and make sure all the posts that I did bring forward are readable. Changing blogs again is not what I planned on doing, but it seems that for some reason I always end up back here at some point in time. Almost like someone is trying to tell me something - stay here. ;-)
January 12, 2020 at 8:17 AM