on January 17, 2020
This morning was not the kind of morning that either Bennie or I enjoy getting out the door.

When I looked at the thermometer, it read 2*F and yes, the wind could be heard making the house groan a bit too much. One of those sounds of winter you learn to recognize if you live in a place long enough and when you hear it, you just shake your head, while you start bundling up.

It is the time of year that Grammy Bertha used to call the "killing time". When it is so cold and if the wild critters have been weakened for any reason, they die. Mother Nature's survival of the fittest is answered during this time of year.

Which means that I made sure that the long johns were on, then came the fleece-lined canvas pants, two layers of technical shirts, a fleece vest, my down jacket and the winter jacket that I purposely bought a size too big for the down jacket to fit under. Then the merino wool socks, ball cap with light clipped to brim, a faux fur winter hat that wraps down around the face, winter mittens and a reflective vest. I was ready to battle the cold winds of January come lately.

Yeah, I looked like the kid in A Christmas Story.

Bennie - he had his harness on. If you put any kind of doggie jacket or sweater on him, he refuses to move - at all. We have tried several times each Winter and the story is the same one, he refuses to move once you put clothes on him. So he goes out in all types of weather - nakid. 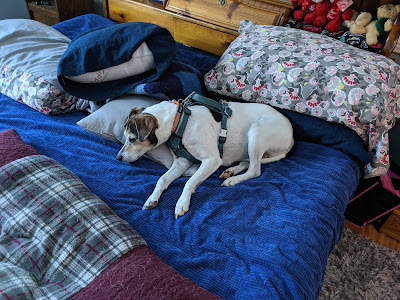 Today, he went out did his business and got himself back in the house shivering and shaking in less than 5 minutes. 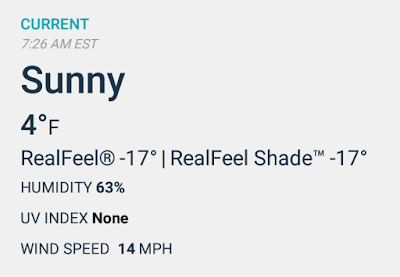 I guess the -17 to -20*F below zero stuff and the stiff wind got his attention in a hurry. Me I wasn't too bad, but I also didn't bother to do a walk to the top of the hill either. Once I got my arse back in the house, it only went out to feed the crows, squirrels and little birds their daily offering. Which was attacked and quickly disappeared.

So there was not going to be a lot of outdoor activity this morning in that kind of bitter cold.

For Bennie's second walk, it was still below zero with the wind chills. We stayed out a bit longer, but not a whole lot longer. By the time we got back to the house, Bean was shivering pretty good. I waited around long enough to make sure he stopped shivering and had warmed back up. 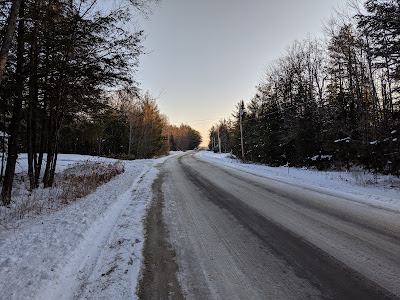 Last night I pooched my iPhone 7 during snow removal and when I tried it again this morning, nothing happened, so I planned on going down to BestBuy and get a new phone. After more than a couple of hours of research last night, I figured that I would end up with a Google Pixel 3a unless they had a killer deal on something else.

I was one of the first customers in BestBuy and an hour later I walked out the proud owner of a new Google Pixel 3a. It took just about the amount of time I thought it was going to and yes, I put it in a case and gorilla glass over the screen. With my history with phones, I even sprung for a year of the replacement insurance - it seems when I don't I pay a lot more in the long run. 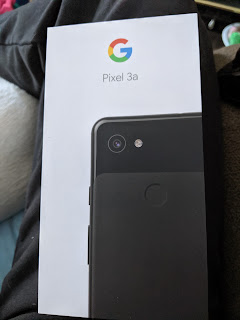 Now me moving to an Android phone from IOS is not really a big deal, I have bounced back and forth between the two over the years and it is just the idea of getting the muscle memory switched over and getting used to the updates that have happened since I last had an Android phone.

On the way home, I stopped at Planet Fitness with the idea that I was going to do a workout, but when I got to the parking lot, I got to thinking about when was the last time that I really took the day off and just relaxed. A pretty long time.

At that point, I texted Mary on my new phone - I still have to get the Google Assistant set up the way I want and headed home. Other than a few household chores and a late afternoon walk with Mary to the top of the hill, I relaxed. I didn't transfer any data from the iPhone, so I had a clean install, but I still had a bunch of stuff that needed to be done to get it about 70% set up the way I want.

It felt good to relax a lot for a change and not be rushing here, there and everywhere or attempting to get this or that done. Tomorrow is going to be a long day, a bunch of stuff in the morning, going to a Celebration of Life about an hour away and then another 6-10 inches of snow tomorrow night. So the weekend is going to be one of those busy ones.

By the way, the Pixel 3a does take some pretty good photos. 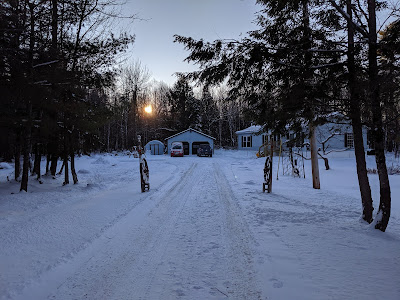 I thought that retirement was supposed to be life slowing down a bit, it certainly doesn't seem to be working out that way around heah - lately. ;-)

This post was written for and first appeared on One Foot In Reality.
daily life Google Pixel 3a
Hshawjr207
Welcome to One Foot In Reality. This blog will be my daily journal where I get to write about things that interest me like running, technology, aging and a lot about what I do and read about over the course of a day. Some things might be boring, but they are a part of everyone's life, but also the parts that make me go mmmm.

PrairieAdventure said…
It was remarkably nice here in western Nebraska today, 37 degrees and mostly calm with a bit of rain/snow mix as a fast moving front roared (mostly) over us. Probably carrying the precip you'll be getting in a day or two. Breezy and snow tonite, then more nice weather. Looks like good pics from the new phone. Enjoyed the post.
January 17, 2020 at 9:42 PM

Hshawjr207 said…
Thanks, it is pretty cold up heah, for now, tomorrow night will be another minor snow that will get people all twitchy and stuff. I really think that the Weather Channel and the way that some forecasters sensationalize the weather makes too many people freak out or over-react. It is a only gonna snow 6-10 inches and that is pretty normal for a storm in January in Maine. We are not getting wacked like the Canadian Maritimes are tonight, so it is not really a big deal. The clean-up is a pain, but nothing that we haven't done for how many years??? Oh well I'll stop my ranting about the Weather on TV. :-)
January 17, 2020 at 9:58 PM

CheerfulMonk said…
We had three or four inches of snow down here yesterday, but it got slightly above freezing today and it was easy to clean off the car. Andy needed to put on chains and to plow up in the mountains. Winter isn't over yet, even though our temperatures have been a lot higher than yours.
January 18, 2020 at 12:32 AM