Bennie is feeling better, yesterday afternoon, last night at about 11:00 PM and again this morning at 4:30 AM, he was having bloody diarrhea, so we were very concerned about his health. Luckily whatever it was that got him going that way seems to have resolved itself and this afternoon he is back to being more like himself.

Things have firmed up a bit in that department, so good news, not sure if it was a 24-hour doggie flu or a bad can of food, but either way, we are more than a little relieved that he is doing a LOT better. 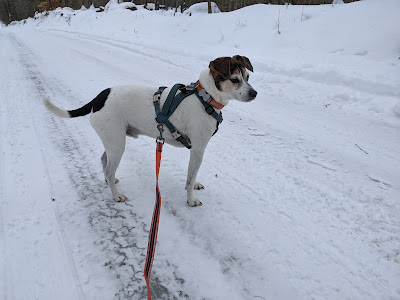 On to simpler things.

Since I am still nursing that damned hamstring, I volunteered to help out at the Central Maine Striders 41st Annual January Thaw over in Belgrade, Maine, instead of running like I had planned earlier this year. It was delayed a week by our bad weather, but today it lived up to its name, the rain stopped, the temps were in the 40's and all I know is that I wanted to be out there running.


So I wore my work pants, boots and left my running stuff at home, so I would even be close to tempted to head out and just "do it".

Tom set me up initially at the turn over by Christie's Market and asked if I would be willing to take photos and also do the Hammond Lumber turn as well. I said sure and took a LOT of photos of the race and then uploaded them to the Central Maine Striders Facebook Group Page. 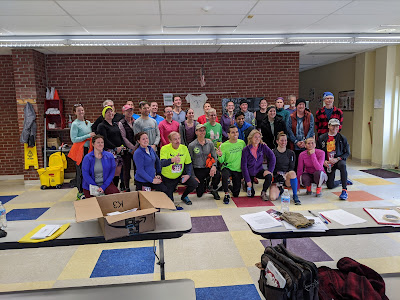 I was surprised at the turn-out of a re-scheduled race, but the weather was about as great as it gets in Maine in January.

One thing that I was totally impressed with is the race's winner - Patrick Caron. I have followed his career for a while now and I have seen him race before. To say that he ran away with the race would be an understatement, but he is a national class runner and compared to the other runners that I have watched lately, he was more floating than running.

Despite a huge lead, his stride was effortless and I know that he was flying. 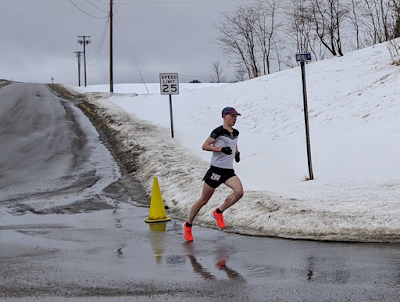 There is a huge difference between National Elite runners and very good local runners, and how they run. From my very amateur viewpoint, Patrick's stride is so much more efficient than it was the last time I saw him run a couple of years ago.

It was fun to see so many of the people I haven't seen for a while and reminisce about past years and other races. That is what the January Thaw is all about getting people out of their houses and back out in the community to see others. Tom and everyone else did a great job coordinating and putting on the race today. It was a fun event.

I have a feeling that I might start getting a little more involved with the Striders again because I didn't realize how much they are a part of my community and how much I missed being a part of a community.

Otherwise, today was a rest day, where I let the body relax a little and didn't worry about working out. Rest is a part of recovery and the leg felt a little better doing nothing.

Overall, it was a really good day, especially with Bennie feeling a LOT better and getting back to being involved a little with the Striders again.


This post was written for and first appeared on One Foot In Reality.
Central Maine Striders daily life RunLog running
Hshawjr207
Welcome to One Foot In Reality. This blog will be my daily journal where I get to write about things that interest me like running, technology, aging and a lot about what I do and read about over the course of a day. Some things might be boring, but they are a part of everyone's life, but also the parts that make me go mmmm.

Sounds and looks like a great day. I did a light workout before my body took over and demanded some alone time to work on repairs. I'm not always good at finding the proper balance between work and rest.

Our January thaw has gone on a bit too long for my comfort but nature will do what she will and we'll all just have to live with her decisions.