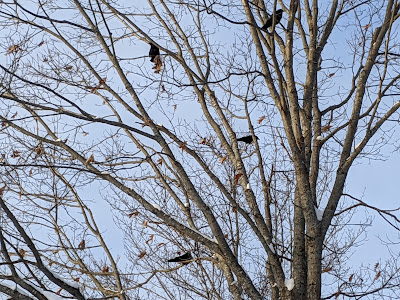 The four crows that stop by and visit us just about every morning. We do feed the bird and critters during the winter and for the past 15-16 years, 4-5 crows have regularly visited us during that time. They say good morning to me and wait until I start walking back to the house before flying in to get their fill. I am pretty sure that they are not the same ones, but I have a feeling that they are the descendants of those first ones.

It is pretty cool to see them flying in most days.

Today we slept in, it was divine after yesterday's long day of working outside. Yeah, I was tired and needed the extra sleep, I noticed that the wife was not complaining at all either. Life seems to be on screech most of the time is tiring and we take our rest when we can.

This morning was seasonable at 11*F, but the breeze made it feel a bit colder, so when Bennie and I headed out and made it a quarter-mile before he decided that it was time to turn around. Then on our long walk, it was a bit warmer, but the wind was blowing a lot more, but he was bound and determined to walk down to Blake Road. It was gorgeous outside. 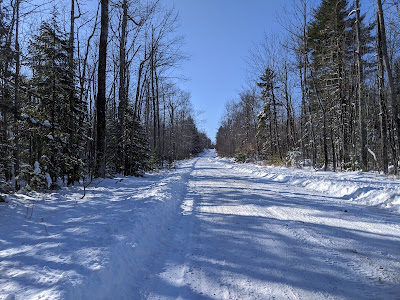 Mary was brave and ran outside, while I decided to head to the gym. At some point, while walking behind the snowblower and roof raking yesterday, I re-aggravated my hamstring and am back at ground zero once again. I knew that the hamstring was bothering a little on my walk with Bennie, not enough to stop, but just enough to know it was there and it was not quite right.

Sometimes there is a reason for all this, but I am not going to stop doing things. I did attempt to tape the leg, but that bothered more than it helped, so I took off the wrap after attempting a half-mile on the treadmill. I didn't even try to get back on after I took off the wrap and headed over to the elliptical in did 3.0 miles on that.

Then I even lifted a few weights. Even though I am not running as much as I want and probably am looking at 2 weeks off to make sure that things are healing up before I attempt to get back on the roads again. I am not going to simply sit on the couch and eat bonbons. I am going to make the best of the situation and work on some of the things that I have neglected by focusing so much on running over the last 8 years.

The afternoon was spent relaxing, finishing up my re-read of Running With the Kenyans. Unfortunately, the second time around was not as good as the first time. I liked the book and highly recommend it to those who have not read it, but at the same time reading it again was a struggle for some reason. Perhaps it is because I am in a different place now with my running than I was the first time I read this book.

A decent day, but damn I wish that the hamstring would let me run, but I will take advantage of the non-running status to work on a few things, like my chicken wings...err arms.


This post was written for and first appeared on One Foot In Reality.
daily life RunLog
Hshawjr207
Welcome to One Foot In Reality. This blog will be my daily journal where I get to write about things that interest me like running, technology, aging and a lot about what I do and read about over the course of a day. Some things might be boring, but they are a part of everyone's life, but also the parts that make me go mmmm.