on January 19, 2020
We got 6-8 inches of snow overnight, not a big deal, but just enough to make for a long morning behind the snowblower.  However, getting Bennie out for his first walk was wading through the snow to get to the road. 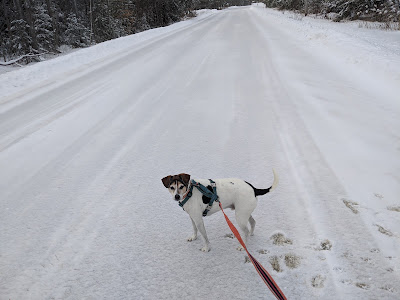 Bennie was not impressed wading in snow up to his belly.

It takes about 2.5 hours of walking behind the beast to get things cleaned up in both yards. However, when I went out to get the snowblower going, everything was running well, but the impeller was not moving. Not gonna help move snow.

I did a bit of troubleshooting and noticed that there was ice behind the impeller. So I went and got a metal post and pounded on the impeller 4-5 times. When I tried it again, it threw snow just like it was supposed to. It seems that that the sub-zero temps for the past couple of days did what it does to water - froze it solid. 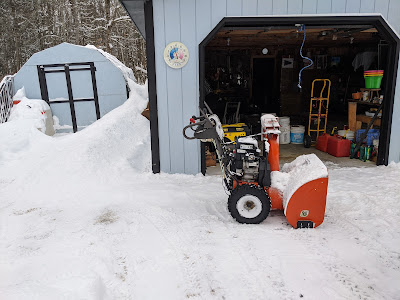 Luckily it was only 11*F when I started, which meant that the snow was powder which is a helluva lot easier to move around than that heavy, wet or freezing rain/ice stuff we have been having. I did find out the secret to snow blowing SD2's driveway, keep the beast in 1st gear and hold down on the handles just a bit in the areas I have learned are a bit too soft and the snowblower digs in too much.

I did have to change my t-shirt after getting done snow blowing, it was soaked through. Lunch was a welcome break and the quick 30 minute nap was even better.

Unfortunately, if you look to the left of the snowblower, you will notice a pile of snow 2-3 feet high. Even though the driveways were done, I was not done moving snow.

With the storm on Thursday, plus last night, it meant that I had to roof rake the garage, house and what I could reach of SD2's roof. It is just preventive maintenance, but it is hell on my shoulders 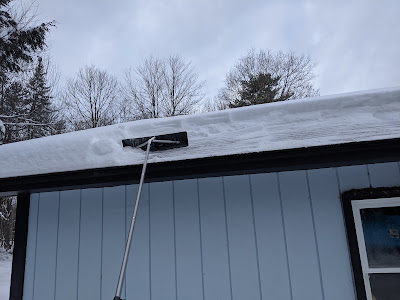 Two more hours of what the Garmin considered swimming for most of it and my shoulder are telling me that I haven't done a lot of roof raking yet this year. Probably the latest I have had to start the roof stuff which is fine by me. 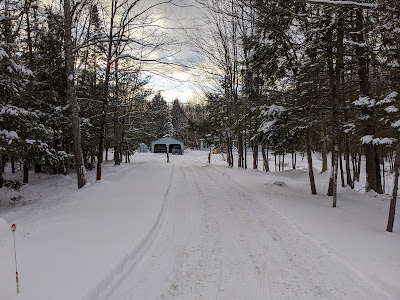 When I looked at my steps for the day, even without a run, I was over 27,000, so I figured that I didn't need anymore working out. My mileage totals for the week sucked, but at least the hamstring is a little better than it was, it just is taking longer to decide that grumbling about things doesn't really stop me from doing other things, it just makes me do other things to aggravate it. :-)

All I know is that the back rub that Mary was kind enough to do to my back sure did help and I have been an eating machine since I started to relax a little.

This post was written for and first appeared on One Foot In Reality.
daily life
Hshawjr207
Welcome to One Foot In Reality. This blog will be my daily journal where I get to write about things that interest me like running, technology, aging and a lot about what I do and read about over the course of a day. Some things might be boring, but they are a part of everyone's life, but also the parts that make me go mmmm.

Kay said…
Oh gosh! All that brings back a lot of my Chicago memories. My husband used to always have to use a roof rake to prevent ice damming.
January 19, 2020 at 11:53 PM

Kay - yep, that is the main purpose that and weight management. Snow weighs a LOT more than people think and once it gets around 20" total on the roof, it is time to get it off. I have seen too many roofs collapse under the weight of a "little" too much snow :-)