on January 12, 2020
On both of Bennie's morning walks it was NASTY outside just about freezing temps and heavy rain, but luckily for us no freezing rain or ice build-up. Well...except for the driveway. That was a sheet of ice - more on that later. 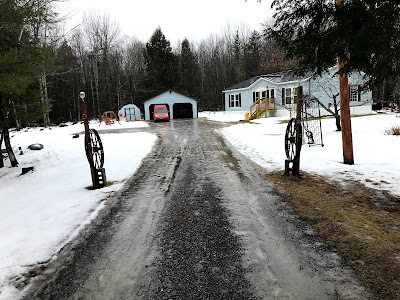 Which meant a good day for the gym, since the roads were great and ice-free.

Going in I knew that I was not going to run and probably will not try running again until Wed-Thurs at the soonest based on this morning's workouts. So I spent about a half-hour on the mat, doing a lot of foam rolling, easy stretching, and other stuff I am supposed to do most days (that I usually don't do) before I workout.


Then I got on the elliptical set it to level 5 and did a couple of miles on that. Nothing hurt or anything so I went over to the treadmill and walk at 3.5 mph for .20 and felt good. Now I read somewhere along the line that if you raise the treadmill to max incline, that even though the speed might not be running speed, that the body still interprets the workout as running. It might be bullshite, I don't know, but that is what I did until I reached a mile. I put the treadmill up to 15% incline, kept the speed at 3.5 mph and nothing bothered.

Although the left leg did feel a bit more tired than the right leg. So I have a feeling that there is some muscle imbalance going on in the legs in addition to the hamstring thing. Gonna have to work on that to get things back in balance.

I know that that the left hamstring still needs some time because while it doesn't bother when I am walking, I also know that it doesn't feel right and until that goes away, I know that I am not supposed to run. I have had enough issues with my hamstring in the past to have an idea of what is what and that is one of the cues I have to listen to - closely or pay the consequences.

That instead of 2-4 weeks down - it suddenly becomes months of misery and not great running.

I did renew my Central Maine Striders membership this afternoon, I kept forgetting to do it earlier and one of the officers sent me an email talking about something I wrote on a blog post several years ago. Once I answered him, I went to the website and got it done before I forgot again. So I am back in the good graces of the club again. :-)

Once the rain slowed down, for the most part, this afternoon I went out and chopped ice to form a path up the driveway that at least today was dirt. The wife broke her wrist when she fell down and broke her wrist on the ice in the driveway a few years back and I vowed that will never happen again, as long as I have something to say about it. The shoulder wasn't too keen on all that pounding on the ice - it never is, but I got done what I wanted and put a heavy layer of sand on the rest. It shouldn't be too slippery now.

Not a great day weather-wise, but at least the ice storm missed us and mostly got just the rain and a few flurries. Phew. Now to get the hamstring back in working order so I can get back to running. I don't mind the elliptical, bike or walking, but it ain't running.

This post was written for and first appeared on One Foot In Reality.
daily life RunLog
Hshawjr207
Welcome to One Foot In Reality. This blog will be my daily journal where I get to write about things that interest me like running, technology, aging and a lot about what I do and read about over the course of a day. Some things might be boring, but they are a part of everyone's life, but also the parts that make me go mmmm.