on January 16, 2020
Well, Bennie and I woke up to the snow that was predicted overnight, well actually it didn't start until around 4:00 A.M.-ish, so there wasn't really a whole lot to worry about. At that point, it was more a nuisance than anything. 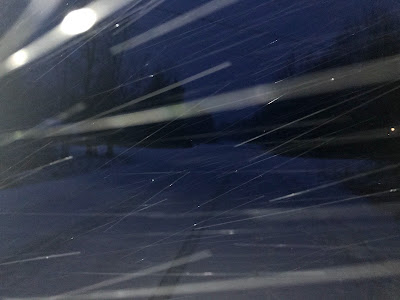 As the day progressed the snow got to be a bit of a pain and the roads were nasty enough that I decided to skip the workout at Planet Fitness this morning. I figured that I would get plenty of time behind the snowblower later (I was correct).

However, Mary had a dentist's appointment for the afternoon, so I needed to drive up to Waterville with her. The roads in Sidney were about as bad as I have seen in a long time, but I also know that the Town Crew is running pretty short-handed so I can't blame them, but still, if I had not needed to be out there it would have been a lot smarter to have just stayed home.


Once we got to the Waterville town line, the roads were clear and just mostly wet, with only a few spots that were greasy.

The dentist appointment went fine and while waiting I got a call from SD2 with some not so great news on Hunter and got a list of stuff that we needed to pick-up on the way home. Which meant a bunch of extra stops with us attempting to find things on the list.

Not what I expected to be doing on a crappy day, but we do love the little bugger and he is worth looking for the stuff he needs to be more comfortable. Unfortunately, none of the stops we made in Waterville had all the things we were looking for and we needed to go to Augusta to see if they had what we were looking for.

After two stops in Augusta, we sort of found something that would work and headed home.

There is something about driving in bad weather, that just toasts me mentally. I think it is the extended focus on driving safely that causes this feeling. I don't let other drivers force me to go faster than I am comfortable and if I am in 4WD in my truck, it means that the conditions are such that I do not feel comfortable. So I will be slower, but I also have not ended up in the snowbank or someone else's bumper in many, many years. However, it does get a bit stressful when someone is right on your back bumper after a while, especially when you are going over the speed limit as it is.

Once we got home it was snowblower time, the snow had just about stopped and there a good six inches of snow in the driveway and two hours later I was done with the snowblower. Due to SD2's driveway still had not settled after a lot of work that was done just before winter began, I don't like to use the snowblower on certain sections.

So I headed back over to finish up with the snow scoop. Everything was going pretty good and on one of the runs, I hit a rock, which stopped me in my tracks. Not a great feeling, since the handle drove into my chest. There was one small problem that exact spot was where my iPhone was in the chest pocket where I keep it when I am snow blowing. I heard a snap - not good, but there wasn't a whole lot I could do about it right then so I kept going to get finished.

When I looked at it at the house, it looked fine, but when I tried to power up, nothing happened???

As I am writing this it hasn't turned on yet and I have a feeling that I messed something up in there. So I have been looking at what to get for a new phone. I am pretty sure that the old iPhone 7 is toast.

The best thing I can see is a Google Pixel 3a that is in my price range, so I will head into Augusta tomorrow and see what happens.

I had expected an easy day where I got to play with the snowblower, but the thing just didn't work out the way that I planned. Sometimes it is just the way it is.


This post was written for and first appeared on One Foot In Reality.
daily life
Hshawjr207
Welcome to One Foot In Reality. This blog will be my daily journal where I get to write about things that interest me like running, technology, aging and a lot about what I do and read about over the course of a day. Some things might be boring, but they are a part of everyone's life, but also the parts that make me go mmmm.

PrairieAdventure said…
Holy cow, what a day! Driving safely in the clag takes a lot of concentration. Usually not a good time to be multi-tasking. I HATE it when I hit something while hand plowing snow. That sudden stop sucks! Phones are amazingly robust but when you hit them just right they can croak. It's always something. Sometimes a hectic day filled with unexpected and vexing stuff is good. Hard to become mired in a rut when life is dynamic.
January 17, 2020 at 12:47 PM

Hshawjr207 said…
It was a long day, but we got what needed to be done, done and the new phone's camera is probably about as good as I have seen in a phone. I looked at the Pixel 4, but decided that I really don't need all the bells and whistles, this one has enough for what I do with a phone. :-)

No ruts around heah, except for the one's the truck make on the dirt road down-back and if the driveway gets too muddy after a big rain or melt.
January 17, 2020 at 10:01 PM