on January 25, 2020
We are looking at a pretty good storm overnight tonight, even though it is January, it looks like we will get mostly rain. Not sure what to think about this, but it will be easier to clean up than 6-10" of snow, although it will make a mess of the driveways that are dirt. They will be close to skating rinks and walking on the dirt road down back will not be happening for a while. 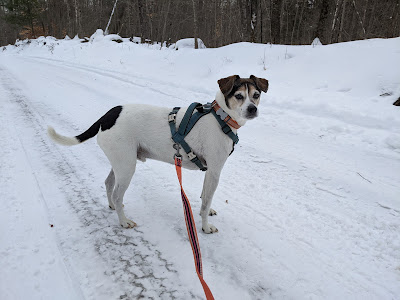 Off to the gym - the hamstring is feeling better but is still not quite right.

It felt good enough to head over to the elliptical to finish the workout.

4.5 miles on the elliptical

A good workout, but one where it emphasized that the hamstring still has a long way to go before I get back to running regularly.

When I got home Bennie had had an accident and messed in the house. He never does that and he hasn't been well most of the afternoon. He seems to have a bit of the doggy flu and has needed to go outside a bit more than usual. It seems he gets this about this time of year most years, so not sure what is going on with him. We will keep an eye on him and if necessary get him to the Vet next week.

At 7:00 PM we watched a half-hour infomercial on the 70's music and we both stopped what we were doing and sang along with a more than a few of the snippets that were played. It brought back a lot of memories. We were skinnier than I remember, the music was stuff we could sing along to, and I tend to believe that we were a lot more innocent than the kids today are.

It was kind of neat to go back to a different time for a few minutes.

I just hope that the rain/snow or whatever mixture of the two happens, isn't that bad, but I am not going to worry that much about something I can't control. I will deal with whatever happens when it happens. :-)

This post was written for and first appeared on One Foot In Reality.
daily life
Hshawjr207
Welcome to One Foot In Reality. This blog will be my daily journal where I get to write about things that interest me like running, technology, aging and a lot about what I do and read about over the course of a day. Some things might be boring, but they are a part of everyone's life, but also the parts that make me go mmmm.

CheerfulMonk said…
What a sweet picture of your pup. I hope he and your hamstring get better soon.
January 26, 2020 at 6:22 PM