on January 21, 2020
Well, that -2*F at the house this morning, meant for a shorter first Bennie walk, but fortunately for us, there was zero wind, so that did help. It had risen up to 4*F for his and Hunter's walk around 9:00 ish, with just a hint of a breath of air. 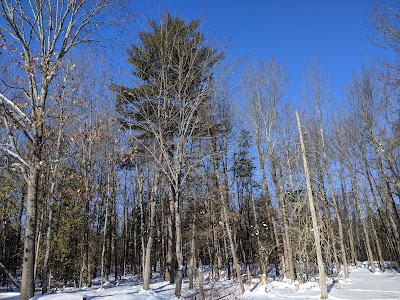 Hunter is doing better, but this kind of cold wears him out pretty quickly, he got in half a mile and called it good. Bennie wanted to keep walking so we walked up towards the speed limit sign. I figured somewhere about there is when he would turn around. We made it to the next telephone pole after the sign and suddenly Bennie's left leg couldn't touch the ground for some reason.

We turned at that point and miracles of miracles the leg was able to support weight again.

After that, I headed to the gym.

Yes, I am officially back on the injured reserve list yet again with that hamstring strain. It is just enough to bother, but not enough to stop me from doing most things. A dangerous situation and one that in the past I would have ignored and run through the discomfort. I am attempting to be a little smarter this year and put the idea in my head that I am not going to run until after my physical next week.

That way if it is still bothering I can talk the doc into some PT or something maybe. We will see.

Either way, I will see if I can be smarter or not. Knowing me, I  probably will have a bad case of Harold being Harold somewhere along the line. However, today I did really good at the gym:

Warm-up routine - check
Balance Work - check
Pushups (15) - check -- not too bad for the first time in a while, now to do them consistently and maybe more sets of 20 when I get the shoulder to cooperate or is that strengthened.

Then I did 6.0 miles on the elliptical - no treadmill at all.

For me this was a winning workout, I usually don't do the balance work and pushups like I  am supposed to. I probably should have done a bit more with the weights, but the leg was starting to grumble, so I decided discretion is the better part of valor and skidalded from the gym before I did something stoopid. 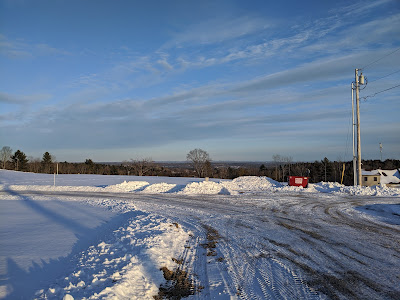 Bennie's last walk was actually pretty nice, it was almost 20*F and not a lot of wind. Bennie was more than willing to do his full walk and I was able to get some shots of the beautiful sky at the top of the hill. 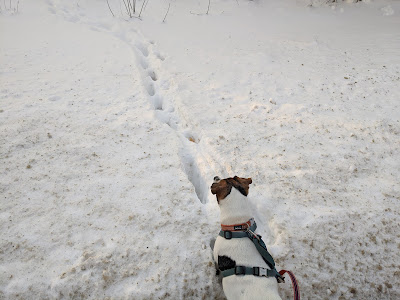 On the way back Bennie needed to stop at each set of animals tracks that were coming out of the woods: deer, squirrel and either a fox or small coyote just up from the house.

While playing on the elliptical is not running it is still a workout and I just need to keep doing.


This post was written for and first appeared on One Foot In Reality.
daily life injury recovery workout
Hshawjr207
Welcome to One Foot In Reality. This blog will be my daily journal where I get to write about things that interest me like running, technology, aging and a lot about what I do and read about over the course of a day. Some things might be boring, but they are a part of everyone's life, but also the parts that make me go mmmm.