on February 04, 2020
You know what is a pretty rough thing to have happen when you least expect it?

Hearing your father's voice on your phone.

The thing is he died last October. 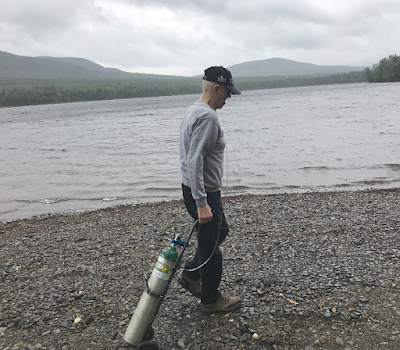 So it was pretty disconcerting, to say the least.

When it happened I had to get up and leave the area I was in and go outside for a couple of minutes to collect myself. There might have been a leak or two sprouting from the eyes. Yeah, hearing his voice today got me pretty good.

Let's back up a few minutes.

I was sitting at the Ford Dealership in Oakland waiting for the Transit to get an oil change. Since I had a few minutes, I was messing around with a bunch of stuff on my new phone. Earlier today someone had told me my voicemail was full, so I decided to go in and delete a bunch of old messages.

The first message was his voice, the second one was another call from him and so was the third one. They were all about a doctor's appointment that I took him to up in Bangor. Just a run of the mill stuff, scheduling and confirming what needed to be done.

Still, it was my Dad talking to me.

Needless to say, it got me pretty good.

No, I did not keep them, I deleted all my voicemails. When I told Mary about it, she asked me why I deleted them?

I just told her that I couldn't keep them, he is dead and as much as I love and miss him, keeping those voicemails would be too difficult to keep listening to over time.

That was tough, but at the same time it was...well those voicemails brought back a flood of good memories about Dad.

.9 - Bennie walk -- During the walk we watched over 50 crows fly overhead and the sunrise was beautiful, of course, this was the day I left my phone sitting at home.
1.2 - Bennie/Hunter walk down-back

I had planned on a bit easier day at the gym since I had done a pretty hard workout yesterday and thought that I would run on the treadmill versus running outside.

3.0 @ 6.4 mph - I wasn't sure about how far I would go, the hamstring had been a bit grumpy all morning and while it felt pretty good warming-up, I could still feel it more than I wanted to admit. However, running slower seemed to aggravate the hamstring more than running a bit quicker, so I decided to run a little faster than I have been. The speed was right where I needed to be and while the hamstring didn't really stop complaining, at the same time it did not feel any worse while running on it.

Otherwise, it was a good workout and I got done what I needed to do without the hamstring grumbling too much. I have a feeling that it will grumble for a few more weeks, but it is getting better, slowwwwwly, but surely. At least I can do stuff on it that I couldn't do a week ago.

This post was written for and first appeared on One Foot In Reality.
daily life lifeisgood RunLog
Hshawjr207
Welcome to One Foot In Reality. This blog will be my daily journal where I get to write about things that interest me like running, technology, aging and a lot about what I do and read about over the course of a day. Some things might be boring, but they are a part of everyone's life, but also the parts that make me go mmmm.

CheerfulMonk said…
I'm glad you had a good relationship with your dad. That means so much.

Andy said…
That is tough.
I still hear my Dad's voice in my head almost every day. It's hard to believe they are gone.
I don't think I have any voicemails to listen to but he's on a few video tapes.
February 5, 2020 at 2:10 PM