on February 08, 2020
We actually got to sleep in until 7:15, not something we get to do very often, between daily commitments and pet walking duties, we are usually up and about much earlier. 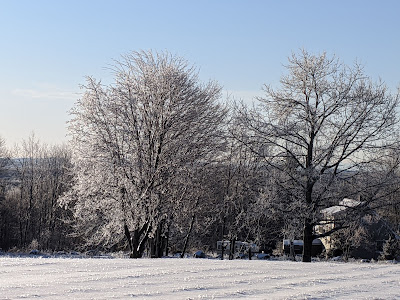 Yeah, it looks purty shining in the sunshine, but it sure is a bother to clean-up after.

Two hours of snow blowing after an ice storm are a pain in the shoulders and the backside. After a couple of days of nastiness, there was about a 1/4 inch of ice on top of a couple of inches of snow, with another coating of crusty snow on top of everything. Then last night it got down to single digits around here and froze everything solid.

Initially, I attempted to just use the snowblower on it - yeah right!

Unfortunately, that worked about as good as me using a broom to clean the driveway and when I was able to get the augurs to bite into the snow/ice mix, I might as well have been using my snow scoop with the amount of work I had to put into making forward progress.

Finally, I gave up and got in the truck and drove up and down the driveways a bunch of times to break up the icy mess. While that helped a lot, I still had to repeatedly go back and forth over the broken up snow and ice, which doubles or triples the time it takes to remove the total 2-3 inches of snow that needed to be moved around.

All I know is that my shoulders are killing me because, in this kind of stuff, you have to hold up on the handles to keep the augurs in the snow versus riding up over the snow.

I probably would have been better off just leaving it and driving over the stuff until it packed down. Unfortunately, there is another storm with more mixed precipitation in the forecast for Sunday night/Monday morning. So I figured I better get take care of what I could while I could.

I guess you could call 2.0 hours behind that snowblower a workout too.

.9 - Bennie walk, the road is still a mess, but better than yesterday. At least today the sun was out for our walk, though at 10*F it was chilly.

I actually felt the best I have in a while when running. Unfortunately, it has been a month since I ran "normally" for me and while I am not quite at that point, I am getting closer. The first run was interrupted by one of those you will get to the locker room now routines. So I started the run over and ran 3.0. While I could still feel the hamstring, I had close to a normal stride.

0.30 @ 3.7 mph -- warm-up
0.50 @ 6.5 mph -- had to stop and enjoy the quick locker room trip
1.0 @ 6.5 -- was feeling good so increased the speed a little to start. Although a guy got on the treadmill beside me and while I am not a real quiet runner, I could hear his footsteps over mine without any issues, but he was also running faster at 8.0 mph (yes, I peeked a look or two - I am a little competitive - age doesn't take that away any time soon), so that does require a bit more force and that end treadmill is historically the noisiest one there.
1.0 @ 6.6 -- No real issues, more like I know you are there hamstring - kind of thing, but not getting in the way.
1.0 @ 6.7 -- I really, really wanted to just run that last quarter, but I resisted the temptation and was good. I am too close to being able to just run again, that I don't want to screw things up by being greedy.

Nike Vomero 14 - They did just fine, although I think they do a little bit better when I wear the toe spacer on my right foot, nothing bothered and the V14s just felt comfortable.

.9 - Bennie walk, the road melted quite a bit, but it is starting to re-freeze and there is a lot of black ice to look out for, we decided not to do the other walk


DID THAT MAKE YOU FEEL BETTER?

The temper tantrum, whining about this or that at great length or putting on a show to show how badly you feel. Did those shows of emotion, throwing things, swearing at people to make them feel worse as well (probably and did they need to feel your pain too?)...did any of that make you feel better?

Yes, we have all lost our "cool" at various points in our lives. However, after all the histrionics did we actually feel better?

No, actually if you really thought about how you acted and the things you said, if you are at all cognizant of anything beyond your own needs, you were probably mortified and totally embarrassed by your display. I know that I am.

However, as I have gotten older and have a better handle on my emotions, these kinds of displays are very rare or are done for a particular purpose that I am in control of. Most of the time when my emotions are overwhelmed by a situation, I tend to become quieter and when possible remove myself from the situation as politely and quickly as possible. It really serves no purpose to have others watch me get pissed off, overreact or whatever other emotions I am going through at the time. I am comfortable enough in my own skin to not need others bear the brunt of my negative emotions.


While the morning was busy with the snow removal, I still had enough energy to go to the gym and get some pre-running work done and a decent run completed. Although I gotta admit that the shoulder massage from Mary felt wonderful. Both shoulders were full of knots and she knows how to clean out some of them.

At some point, I may have to see Frank and have him abuse that right shoulder of mine. It is starting to act up to the point where I am having some discomfort in there again. It will always be an issue for me, but sometimes you have to suck it up and just do what you gotta do regardless of how something feels, especially when it is one of those things you have put up with for over 30 years.


This post was written for and first appeared on One Foot In Reality.
daily life lifeisgood RunLog
Hshawjr207
Welcome to One Foot In Reality. This blog will be my daily journal where I get to write about things that interest me like running, technology, aging and a lot about what I do and read about over the course of a day. Some things might be boring, but they are a part of everyone's life, but also the parts that make me go mmmm.