on February 21, 2020
Sometimes things really work out in the strangest of ways!

On Wednesday, I had to take our new Ridgeline in to get the rest of the accessories installed and I sitting in Charlie's Honda waiting room relaxing a little while the work was being done.

There were four others waiting there with me and everyone was pretty quiet, doing their own thing, reading, watching the TV or just staring off towards the service department door. The guy across from me kept looking at me as if I was familiar, but he didn't look like anyone I knew right off.

I noticed that one of the other customers was wearing a camouflaged hat with the Coast Guard emblem on it. So, of course, I had to ask if he was a Coastie?

It turned out he was a retired helo pilot who had done 10 years in the Navy and like he said gotten smart and joined the Coast Guard. We swapped a few stories, to see if we had any people that we knew in common and while we were talking the guy who had been looking at me spoke up and said he had been in the Coast Guard in the mid-'70s at AIRSTA Cape Cod and had worked at Hangar 128. 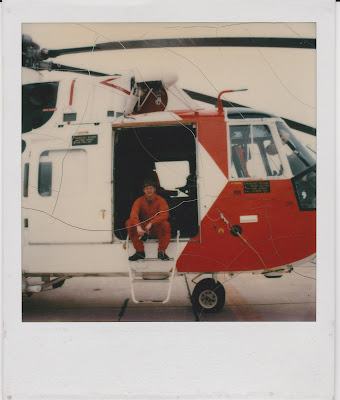 I told him that I was stationed there from '77 to '79 as a Yeoman and gave him my name and he told me his. Hell, I was his Yeoman while he was there. He said now I remember you, we were stationed there together. We talked for a bit about people who's names we remembered, (some brought back a bunch of memories). We swapped a few sea stories from back then, talked about how bad the box lunches were and how things went for us in life after Cape Cod.

Then it seemed like everyone was talking and come to find out that the other guy there was at BIW, while I stationed there '88-'90 as part of the Coast Guard's 378 FRAM project and worked on the Hamilton too. 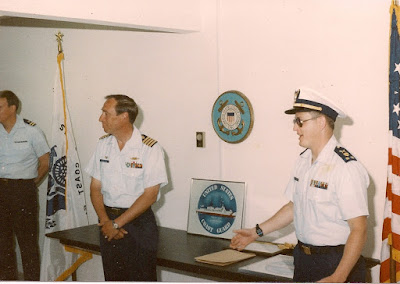 It is strange how things work out sometimes. What are the chances of two retired Coasties, one former Coastie and a worker from BIW who worked on a Coast Guard vessel, all sitting in the same Honda showroom at 2:00 P.M. on a Wednesday afternoon in Augusta, Maine?

It happened and it was very, very cool.

Yeah, it brought back a flood of memories, good and bad from back in the day.
Charlie's Honda Coast Guard
Hshawjr207
Welcome to One Foot In Reality. This blog will be my daily journal where I get to write about things that interest me like running, technology, aging and a lot about what I do and read about over the course of a day. Some things might be boring, but they are a part of everyone's life, but also the parts that make me go mmmm.

joeh said…
I would say the odds are pretty damn low/high? Not too damn likely!

The Coast Guard is tough, dangerous duty; they get very little credit compared to the other services.
February 21, 2020 at 9:08 AM

Hshawjr207 said…
Yeah, I agree, pretty much because we are not part of the DOD and have been an orphan service for many years that has not had a permanent home and most don't realize the different things that the Coast Guard does do beyond Search and Rescue. Thanks for recognizing that
February 24, 2020 at 8:19 AM