on March 31, 2020
Opening up Blogger tonight was a pretty big surprise!!! Google has updated the blog editor to their Material Design and some of the issues I have had with their Photo app to Blogger problems seem to be solved. Which is very nice. However, it was a bit of a shock to see it when I first opened it to do my blog post tonight.
That was a nasty little snow that we had overnight and like most Spring snows, it is that heavy stuff that my Grandfather always called heart attack snow shoveling snow. 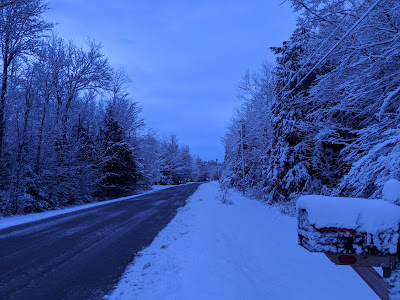 Walking Bennie was a bit of an adventure with the icy build-up on the road, but we got it done.
This morning we made a quick trip to Sam's Club during their elder hours and were pleasantly surprised by the lower numbers and how much stock was actually in the store. The other thing was how focused everyone was on getting what needed and getting to hell out of the store as soon as possible. There was very little talk, quite a few people are starting to wear masks and some kind of hand covering. That is what we did, we prepared a list of the things that we really needed prior to going and just got those things, although the TP was still out. Some other stuff they didn't have what we usually get, but they had alternatives, so we just substituted, did the self-checkout and went straight home.
I ended up snow scooping the entire driveway, using a snowblower this time of year is a bad idea. So manually scooping the drive was the order of the day, which was not a lot of fun, but at the same time, it was kind of cathartic due to the repetitive nature of pushing snow with the snow scoop and then walking back to do it again. It was just something that needed to be done and by the end of the day, the driveway was completely clear of snow. Which was very nice.
However, once I got that done, I was pretty well tuckered out. While I am in pretty good shape for running and general yard work. Manually scooping a 236-foot driveway is still pretty tough work.
I waited until later in the day to run and decided to go down to Pepin and back. It was a nothing special run other than getting it done and getting some dirty look from a family that I have never seen before in all the years I have been running down there.
Most everyone is pretty friendly, but these people were downright hostile and glared at me from the other side of the road the first time and then the second time he purposely kept looking at his phone while she glared at me. Oh well, strange times make people act strangely, but this was the first time I have encountered this level of strangeness. I purposely ran very wide of them and said hello and smiled both times.  Oh well, just the way things are going to be for a while.
When I got back my legs just felt like they had been beaten up and this is the second run in a row that they have felt this way. I have a feeling that the Bondi 5's at over three years old seem to have lost something and that I need to end the experiment I have had with them before my legs start to complain even more.
So they will head out to the back of the garage and I will alternate in my Propels with my GlideRides for a while. It is too bad because I was running well in the Bondi 5s, but if my legs bother me that much after a few 4-6 mile runs then it is not worth running in them now.
All-in-all a pretty good day and another day closer to warmer weather and getting to the other side of Covid-19 and all the changes that it is and will bring to our lives. Regardless of what some people say or even think it has and will bring change, it is now more what those changes will be.
The Good? The Bad? The WTFO were they thinking? This post was written for and first appeared on One Foot In Reality.
daily life RunLog
Hshawjr207
Welcome to One Foot In Reality. This blog will be my daily journal where I get to write about things that interest me like running, technology, aging and a lot about what I do and read about over the course of a day. Some things might be boring, but they are a part of everyone's life, but also the parts that make me go mmmm.