on March 21, 2020
Okay, so now that I have figured out how to separate out my thought about the Pandemic and my Running, which are two different things, but often happen simultaneously. I just need to separate out the serious from the mundane and go from there.

So let's talk about my run yesterday and today in this post.

Yesterday's run was a bit different because I got an old pair of running shoes out of shoe purgatory and wanted to see if I made a couple of little changes if they would work for me or not. They were the Hoka Bondi 5s, which I really liked and would have kept running in them if they hadn't bothered my right foot so much. I like my ASICS GlideRides but want another pair of shoes that I can rotate with them, just to give my legs a bit of a different feel, until the weather gets a little warmer and/or I decide that I running harder isn't going to bother my immune system enough to make any difference.

So I switched out the fairly thick insole in the Bondi 5s for a very thin one and made sure that I wore my little toe spreader before I headed out the door. As a result, the Bondi 5s were not quite as cush feeling, but at the same time, I had more room in the toe box, so that part was good. 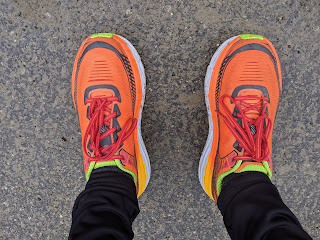 Once I got going I remembered how much I do like running in the Bondi's, the ride and transitions are smooth and I don't feel as though I am fighting myself to run comfortably. Then again, I really have always liked the Hoka ride, my only problem has been the fit on my right foot. 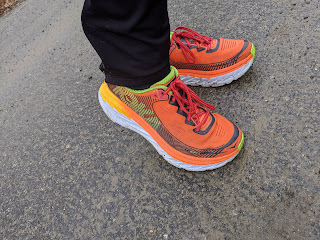 The weather was pretty damp and the roads were wet, but it didn't rain, but it was still pretty breezy heading out. Going down Philbrick hill was great and I got through the first mile nicely. Even though I was running against the wind most of the way down to and into Pepin, it didn't feel as though I was working nearly as hard and without trying my cadence was a little faster and I just felt good...well until I got off the tar section and decided that I suddenly needed to visit that little blue box on the side of the road pretty badly.

Once I got that interruption out of the way I got going again and felt decent. Even going back up Philbrick didn't feel as tough as it has been lately. I did purposely pick up the pace a little once I got to the top of the hill and finished the run on a really good note.

It was probably the best run I have had since I injured my hamstring back in January. Was it only the shoes? I don't think it was just the shoes, but I gotta admit that they didn't hurt and my right foot didn't bother at all with the toe spacer in there, which is all I could ask for.

We will see how things go with more runs in the Bondi 5s. However, with that toe spacer in they were comfortable enough that I did order a pair of Hoka Clifton 6 in 8.5 ee from a running store for a decent price to put away for future needs. I just want to make sure that I have good shoes to run in when I do need them because this pandemic stuff is going to get worse before it gets better.