on March 01, 2020
Another February in the books, one where I thought a bit about how I retired 24 years ago on February 29, 1996 and it brought back a bunch of memories, a little bit of what might have been if I had stuck it out a little longer and the fun I am having with my life now.

It was a month where I did a lot of thinking, reflecting, researching, reading and yes, even running. It all ended up with February being a better month than I expected and even some fairly big surprises happened during the month that were pretty cool in the long run.

My favorite photo from February 2020 was:


I will answer my own question right now. Is this turning back into a running blog?

My answer in a word is "Nope".

It just seems that way lately, with my running injury, multiple new running shoes and not writing a lot about what I am doing beyond those things make it seem that way. I purposely moved away from the daily life blog for a little while to try something a little different and while I like what I did, for the most part, I did miss blogging daily as well. So I will be getting back to more blogging about daily life (for the most part), along with everything else again in March.

Also, I have been reading a lot more which has pushed into the time that I normally would be writing blog posts, which is a good thing because it has slowed me down but does cause me to think about and look at things differently. One book that I haven't quite finished yet, is 48 Laws of Power and it does answer many questions I have had about different things I see and hear from our leadership (from both parties). I go from being pissed off, to nodding my head, to shaking my head, to closing the Kindle app in disgust, when I compare some of the things in the book to what is going on around us today. It is a book that I can only read for 2-3 chapters at a sitting at most, while reading it there is just too much going on in my head to focus on what the writer has written. A good book to read if you want to understand Washington or other power brokers playbooks a little better.

We are still making some major changes to our lifestyle by trading in the old 2011 Ford Ranger for 2019 Honda Ridgeline. So far I am loving the Ridgeline, although I am not crazy about the electronic security of being able to start the beast without a physical key inserted to drive off in it. There is just something that makes me cringe a little too much on that note, but otherwise, we are very impressed with the Ridgeline. 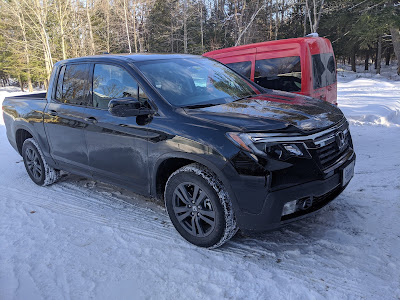 It did great in the snowstorm I took it out on the second day we had it and I love all the storage space it has beyond the pickup bed. Now to see how I like it in seven years ;-).

One thing that I was very happy about was that Mary found one of what we believe was her mother's Carnival Glass and was able to bring it home with us. After Mary got to really looking at it after we got it home, there was a flaw in the bottom that she recognized from all those years ago. 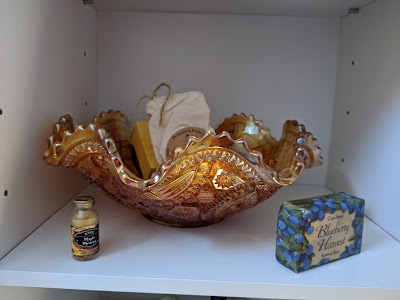 The back of the left leg, I tend to believe it is my hamstring, while my massage therapist seems to think it is a different muscle is slowly getting better. I somehow got in 100 miles for February and didn't reinjure myself while going over 30 miles this last week to achieve it. So while there is still some healing left to go with whatever is going on in the back of my left leg, it does seem to be progressing fairly well. It is just taking longer than I expected it to, which does happen as you get older, things do not heal as quickly as they used to. 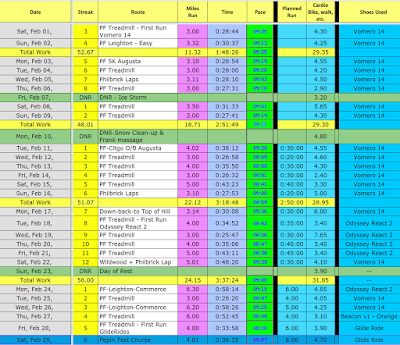 I have been doing more weights, body weight, along with pre and post-run work than I have in a long time and yes, it does seem to be helping with both my running and the rehab on the back of my leg. 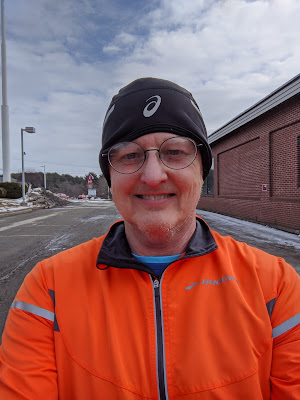 Also, I went through a couple of more shoes that while I can run in them they really are not what I am looking for in my running shoes.

Nike Vomero 14 - I like them, they are comfortable but feel dead underfoot to me when I take them outside. Plus when I get up above the 6.0-mile mark I could feel the thinness of the forefoot like I could with the Pegasus line and that was the major reason that I stopped running in Pegasus line. 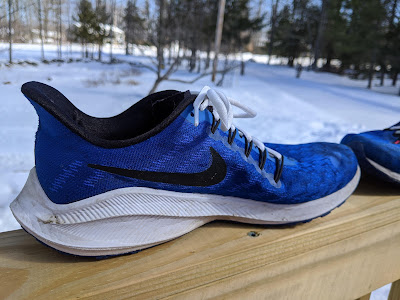 There is something, I am not sure what, where it feels as though I am working my butt off and not getting anywhere close to the paces that expect for that amount of work. No, I cannot put this one off to getting older, because in other shoes with that level of effort, the paces are faster. So while I can run in the V14s they are not a shoe that I want to run in. There is a big difference.

Nike Odyssey React 2 - I had big hopes for the OR2, especially with the Odyssey name and that being the name of the only running shoe that I have ever finished a marathon in. I run well in the React midsole and like the Epic Reacts, I like the feel they provide underfoot on both the treadmill and outside. 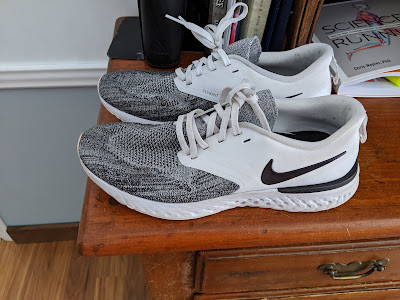 However, the deal-breaker for the Odyssey React 2 and when I was running in the Epic React last year was not my Tailor's Bunionette, it was the lack of cushioning in the tongue. In order to get the level of heel lock that I want when I run, the laces would bite into the top of my feet and become very uncomfortable after a couple of miles. Not what I want to deal with on a longer run, so they will either become walking shoes or simply disappear. They were a $25  eBay experiment so I am not out a lot either way. 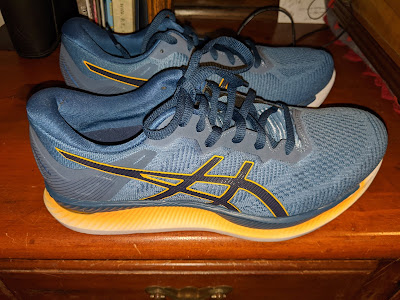 As a result of those two pairs of running shoes not working the way that I expected I finally broke down and ordered a pair of ASICS GlideRides from Running Warehouse last week. It was their last pair in my size and with what I consider the upcoming disruption to the supply chain, I figured that I better do it while they were in stock. So far I have been pleasantly surprised at how well they have done for me and am looking forward to getting them broken in this next month.

This post was written for and first appeared on One Foot In Reality.
February month in review
Hshawjr207
Welcome to One Foot In Reality. This blog will be my daily journal where I get to write about things that interest me like running, technology, aging and a lot about what I do and read about over the course of a day. Some things might be boring, but they are a part of everyone's life, but also the parts that make me go mmmm.