on March 23, 2020
Winter storm tonight with between 4-8 inches of the white shite predicted overnight, yeah when it snows after Spring has sprung, I tend to call it white shite. This means that tomorrow is going to be a mess and we will see how much running is actually done.


However, today the temps were in the mid-'20s and the breeze reasonable by the time I got through walking Bennie for his long walk, although it did get down in the low teens overnight, so the first walk was a bit chilly. So I was looking forward to running down-back to the Town Office and back. 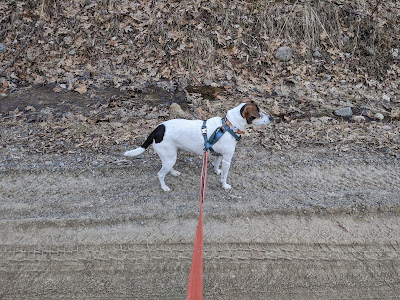 Everything started off great, I was feeling good, but when I got to the dirt, I noticed a certain sliminess underfoot. It has been a really strange year, if I have not run or walked down-back by 10:00 AM, it seems that the dirt road is on a timer and when it goes ding, the muddy slime comes out no matter what the actual temperature might be. Even when the sun isn't shining - like today.

I made it down to the lower gate and told myself this is simply being stoopid, the road is getting slimier by the minute and you want to run another 30 minutes on the goop, you really are crazy and asking for another injury.

Yeah, I turned around.

I ran back up Stevens Hill and focused really hard on not landing on my arse or having a mud facial. In a couple of spots, I may have slowed down to a slow walk and then got going again when I got past the frozen tire ruts that had sneaky slime all over them.

I am sure that I made the right decision.

Then I decided to run down to Pepin. I just cruised along, looking carefully at the yards of houses that I know have their dogs out a lot more now that they are home. Phew, no dogs on the way out to worry about. Coming back I was still pretty vigilant and while I slowed considerably coming back up Philbrick, I still kept plugging along.

Today when I went down around the Circle, the garbage man was in front and then behind, then in front, which of course made me speed up a little, especially when he got in front of me. The aroma of the back of the truck even in winter is not the most pleasant, to say the least. However, I have nothing but respect for those guys, they are doing dirty, nasty work and now possibly dangerous work for not so great wages, even though it is a time when most people are home avoiding everyone else. They still pick up the trash and do a job that has to be done. Otherwise, if garbage is not collected other crap starts to happen that we don't need.

When I finished, I realized that this was the first run in a long time that I haven't thought at all about how my left hamstring was doing. Which means I am beginning to make good progress. Now to stay out of the slime and no tempt fate by slipping and sliding and re-pulling the hamstring.

Yeah, can you tell I am excited by that 4-8 inches of white shite we are supposed to get tonight? Oh well, we have had blizzards in April so I can't complain about a familiar foe that will go away in a few days at the end of March.