This is kind of weather that I would really have preferred the gym and the treadmill. 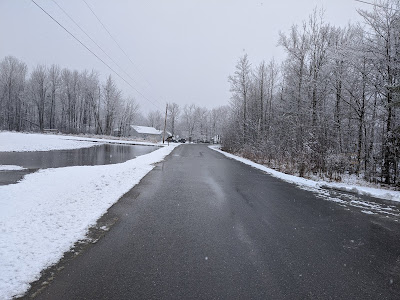 If I sound a little disgusted and tired...I am.

Okay, now that that whining is out of the way, let's talk about my run today.

It snowed overnight and has snowed, rained, dropped ice pellets and snowed again all day like it is doing right now. Which kind of sucks on March 30th, but is not unheard of, but the good news is that the accumulation has stayed right around an inch or two.

So, in other words, it is not snowmageddon or anything like that.

It is simply a wet, nasty spring snow that we get most years in late March or early April. 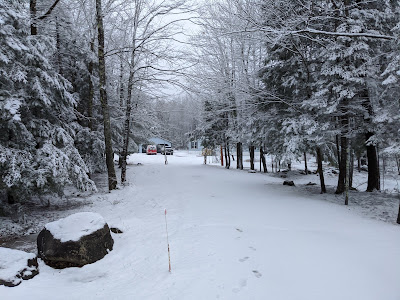 For some reason or other, today the snow is just putting me in a foul mood and even getting outside to run in it wasn't all that pleasant or mood-enhancing. Especially, since I ran in shorts and just a long sleeve t-shirt for the past couple of days, which is probably why I am feeling like I am. I am ready for sunshine, warm temperatures, and signs that Winter is truly over. Unfortunately, this week is going to be cloudy and nasty for most of it.

This was one of those runs where you just get out the door, do what you need to do and get back inside.

The first mile was slow as I learned where the slippery patches were and figured out how wet my feet were going to get (they got soaked). The temp was right at 32*F (yes, that is freezing), so some of the roads felt a bit greasy and some of the puddles had a skim of ice on the sides, so I didn't bother consciously attempting to pick up the pace much even after the first mile.

Although it seems that I did naturally pick up the pace without realizing it. Not a lot that is for sure. The good thing is that I stayed upright during the whole run and got in 4.0 miles that I was seriously considering not doing. In another time this would have definitely been a treadmill day at Planet Fitness but with things as they are, it is just another run outside all bundled up.

I won't say it was a great run or any other lies like that, but it was a run and it is done. Looking at things from a different perspective. I am thankful that I am still able to get out the door and run, especially when so many are not as lucky. 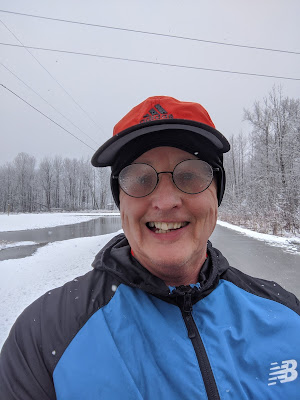 Yeah, when I look at it that way, even with all the whining, it was a good run. I finished it. Even if I couldn't see a damn thing towards the end through my glasses. :-)