Twenty-Four years ago today, I swallowed the anchor and walked out of the First Coast Guard District Office Building at 250 Causeway Street, Boston, Mass and retired after 20 years, 08 months and 08 days of service. When I retired and left the building, I did not look back and for the next few years, I tried to move on from being a Coastie. I was proud of my service but wanted to be more than just a retired Coastie. In other words, I was burnt out on everything Coast Guard.


Eventually, over the years that burnt out, feeling left me and I embraced having been a part of one of the World's finest military organizations. Yes, the U.S. Coast Guard while being the bastard step-child of the U.S. Military is still and always will be a military organization. The missions might change and the Governmental Departments that it is a part of may change all too often, but at the end of the day the U.S. Coast Guard does its missions and does them well.

Although we might have to scrounge, beg, borrow or steal from the Navy and other branches once in a while when they are not paying close attention to what we are doing on their bases. I still have a few memories from escapades in GTMO and Norfolk/Little Creek that make me chuckle. It was a good thing security was a lot laxer in those days or that they just simply turned a blind eye to what we were doing.

Oh well, here is to 24 years of retirement and hopefully at least that many more and yes, I am a proud Coast Guard Retiree.

What did I do for excitement on such a great day in my life? I watched the Olympic Marathon trials race on NBC this afternoon. While the men's and women's races were phenomenal, NBC's coverage of them sucked. There were way too many cut-aways, we missed several important moments that counted in the race. Many dreams were dashed against the hard rocks of reality and a very tough course in tough conditions and those are the moments that were ignored.

Plus with double the number of women runners, why on earth did NBC choose three old white guys to do most of the commentating. Some things just don't change, even as the demographics of who is doing what does change.

Also while the top three are who are going to represent the U.S. in both the men and women's races, well if they hold the next Olympics. The way that NBC pretty much stopped covering the race when those runners runners finished. While they did cover Desi's finish, but there were stories that they ignored the memories and stories that were still being made beyond those six to seven's people's races. They totally discounted and ignored the other runner's struggles, triumphs or running, once the podium and who would be representing the U.S. in the Tokyo Olympic Games were decided

.9 Bennie walked to top of the hill
1.6 - Bennie and I walked down to Blake there were sections that were rather icy, but there was dirt sections all the way down to the big pine and after that was where it got squirrely and I had to really pay attention or I would have ended up sitting in the middle of the road down there. 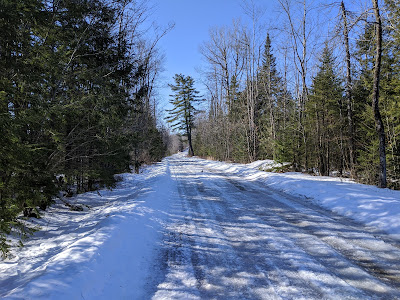 Planned run: 4.0 Miler down to Pepin
Warm-up: None
Run
Pepin Test Course | 4.01/36:35/9:07
I started slowly and going down the hill felt really good. Going down Pepin the GlideRides felt great, no issues with picking up the pace and they were comfortable. They have a preferred style of running and it is the heel first landing without any doubt. If you attempt to go to a forefoot landing it is not the same. It was a little breezy and chilly, but not enough to slow me all that much. I could tell it was the first time I have run back up Philbrick Hill in a while. The legs and lungs didn't like it one bit, although I did pick it up a little after I finally made it to the top. 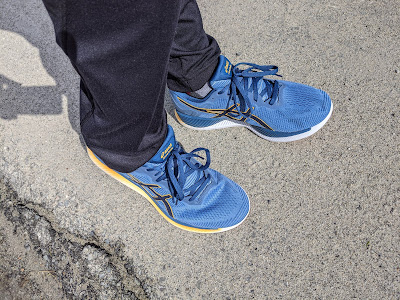 Asics GlideRide - Did quite well for the entire run, felt comfortable on the downhill and coming back up the hill, they didn't get in the way, unlike some other shoes in my current roatation. I really like the front toe box and the room over my toes that it does have, but will have to use thinner socks. It is just a little snug with my winter weight merino wool socks. Which won't be needed pretty soon in any case. Although coming back down from the top of the hill to the finish the bottom of my feet complained just a very little. It is part of the break-in process for more cushioned shoes in my experience.

1.0 - Walked to top of the hill and then a little extra when we met up with Hunter, SD2 and Mary
1.7 - I walked by myself the first lap and with Mary the second one.
Read to 48 Laws of Power to law #41, still learning a lot from the book and most of it answers many questions that I have had about the "why" politicians do things the way that they do.

Coast Guard daily life lifeisgood
Hshawjr207
Welcome to One Foot In Reality. This blog will be my daily journal where I get to write about things that interest me like running, technology, aging and a lot about what I do and read about over the course of a day. Some things might be boring, but they are a part of everyone's life, but also the parts that make me go mmmm.