on March 26, 2020
Yesterday was one of those days where I had trouble focusing on writing and stuff. Just a lot going on and while getting out of the house for our daily walks and then my run were pretty good, writing about things just didn't happen.

As I write this sort of combo RunLog/Pandemic Journal entry, the wife is on her way into Waterville's Hannaford to get supplies. In my mind, it is something that I should be doing not her, but she saw a report and did some more reading that showed that if men get the Covid-19 virus that we are more likely to die or have severe complications from it than women are. 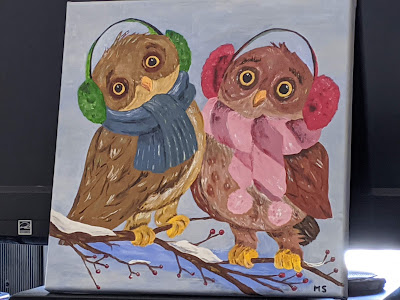 It seems as though she wants to keep me around for a bit longer and put her foot down about who was going to do the shopping today. When she gets in a particular way, I don't bother trying to change things, although I disagree with the reasoning and have told her that. I would have more luck moving the big rock out in the front yard with my bare hands than I would be changing her mind. So I am sitting here, being the one that is worried about her and how much she will be exposed to others while she is out.

Although in the long run if she is exposed to Covid-19, I will be as well, because I have no plans to be anywhere but at her side through all of this. Through sickness and health, those words never rang truer to me than they do this morning.

Strange how love is sometimes, we worry about one another and are willing to put ourselves in harm's way for the other, when we believe it is the right thing to do. Oh, what is so strange about that? Is that not what love really is...being willing to do more for the one that you love and sometimes be willing to let the one you love do what they believe is correct, to protect you. It is not easy being on the other end of that belief, but at the same time...well I think you all understand.

My run yesterday was a really good run, I decided to slightly turn up the effort level for a couple of miles as I headed down to Pepin and then backed off once I hit that point. I felt good the left leg was slightly tight but not as bad as it has been. I probably could have climbed up Philbrick a little harder or faster, but I really am not attempting to push the paces very hard right now.

I do not want my immune system to be down for any length of time, so I am just working on maintaining a good fitness base of 4-6 miles a day at a steady pace. Nothing super fast or hard, but every once in awhile I throw in a quick pick-up or surge just to let the body know it still can have fun once in a while. 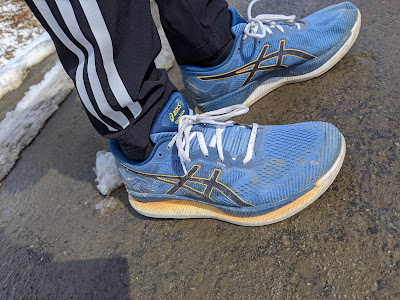 The GlideRides will never be a go-fast shoe, but they are very comfortable and I am looking forward to doing some longer runs in them to see how they are past my current self-imposed 6.0-mile limit. It will happen, I just have to be patient.

I will be blunt.

He scares me more than he reassures me and his press conferences are becoming more and more like campaign rallies where very smart people are having to kowtow to his brilliance and bullshit to get things done. In all the years I was in the military and that I have followed politics there has never been this level of kiss-assing for a leader in the United States. It has gotten to the point where when he is speaking, I am starting to mute the television and when he stops I turn the sound back on. I have the close captioning on so I can still read what is being said, but damn...I do wish he would listen to the experts and provide the leadership the whole Country could rally behind.

Instead, he is going back to attacking, attacking and continuing to divide the country, which is the last thing we need. If he does a good job with the pandemic he would get re-elected. Unfortunately, from this little view back in the boondocks, all he does when he speaks is make things worse and the lies keep mounting. The Country is beginning to look to others for leadership, which is sad at a time when we DO need strong central leadership.

As the Covid-19 numbers keep growing exponentially, I do not see Easter as a great time to re-open the Country for business. Let's get to reality, work our way through this difficult time and admit that our world has changed and will not go back to being the way it was a month ago anytime soon, if ever.

This post was written for and first appeared on One Foot In Reality.
Hshawjr207
Welcome to One Foot In Reality. This blog will be my daily journal where I get to write about things that interest me like running, technology, aging and a lot about what I do and read about over the course of a day. Some things might be boring, but they are a part of everyone's life, but also the parts that make me go mmmm.

Andy said…
It is Dr. Fauci, not Tony. The man lacks any ability to show respect, especially if the other person is smarter or just knows more than he does.
One of his many insecurities.
March 27, 2020 at 4:08 PM