We went down to Sam's Club in Augusta yesterday afternoon, fully prepared to just drive through the parking lot if it appeared too busy or lines going out the door.

Yes, we were concerned, worried and more than a little trepidatious about even going into town, but needed a few more things. However, plus me being me, I wanted to see how things were actually going versus what the news folk and social media types were saying. I figured that the big rush would have been over the weekend and on Monday. The parking lot was busy, but people were entering without any kind of wait so we went inside.

Most everyone seemed to be a bit relieved once they got inside and people did try to keep their distance from each other for the most part. No one seemed to be in panic mode and actually, I thought that people were more polite and smiling at one another more often than usual. About the only place, we encountered people getting a little too close was the rotisserie chicken area when a woman got a little closer than necessary, but then again there were only 4-5 chicken left and she looked like she wanted one pretty badly.

The majority of people who were in the store were older, although a few with kids (schools finally closed), but not too many younger adults. One older gentleman had a mask on and we saw one other person with a mask, I thought that there would be more of them than there were. Other than that the biggest thing that I noticed was that most of the people kept their gloves on, come to think of it we did too and then took them off when we got back to the vehicle and washed everything after getting home (well after our walk in the rain that is).

The things we normally get on our weekly Monday Sam's Club run were pretty much in stock or similar items were available. 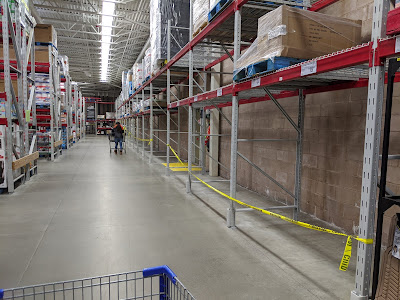 Yes, some areas of the store were wiped out paper products (no toilet paper), cat litter, some pet supplies, cereals, and easy to prepare/eat foods. Like the Wife said, it seemed that the higher end, fish oriented or ingredients for cooking for more available than the easy to prepare stuff or paper products.

Actually, I thought it was not quite as busy at Sam's Club as it had been for the previous month when we had been in there, so that was nice and a bit of a relief at the same time. I am not a big fan of large crowds in the best of times and this is not the best of times to be around large groupings of people so that reduced our stress level about being in there a little as well. It doesn't mean we were not exposed to the Covid-19, it just means that there was less of a chance of it, because there were not as many people.

When we left, I wanted to see how Walmart was faring. So we drove by and the parking lot was wall-to-wall cars. I would not have even gone in if we had had to, it looked a little crazy and we just hight-tailed it out of the Mall area and headed home.

We are settling down to avoid going into town for a while and hoping that we were not exposed to Covid-19 while out and about today. We will see.

I did take the day off from running, I had a 9-day running streak going and with the nasty snow/rain temps in the low 30s, I just decided to relax a little and not go for a run. Although later in the afternoon, we did walk the dogs and then did a couple miles of walking in the rain with the one that love.

I talked with D2 for a bit and wished Elyjah a happy birthday.

The worst part of the day was at 9:45 PM we suddenly lost power. We were watching Oak Island and they were coming to the climactic portion of the show and wham - sudden darkness. So after fumbling about for a couple minutes we just went to be. Power was restored about 1:00 AM, which means that I am tired this morning because I don't sleep well if the power is out and we are waiting for it to come back on.

Life goes on and all we can do is keep smiling and taking it day-by-day.

This post was written for and first appeared on One Foot In Reality.
CV-19 daily life lifeisgood
Hshawjr207
Welcome to One Foot In Reality. This blog will be my daily journal where I get to write about things that interest me like running, technology, aging and a lot about what I do and read about over the course of a day. Some things might be boring, but they are a part of everyone's life, but also the parts that make me go mmmm.

joeh said…
Wife made a Costco run before the panic, we have eggs bacon sausage and steak to last for a long time, plus my diet consists of a powdered protein that only needs water which we get filtered through the fridge, so that gives me a months of dinners. Hoping the curve will start to flatten in 3 to 5 weeks or less.
March 18, 2020 at 1:30 PM