The biggest thing I did today was going to Shaw's up in Waterville. With all the social distancing, emergency declarations and other stuff, it made the decision to go into town a bit stressful. However, there were some items that we needed and I probably have the best schedule and immune system, so I volunteered last night to be the guinea pig.

They did advertise that from 7:00 to 9:00 AM were set aside for at-risk populations and from what I could see that is mostly who were shopping there this morning. I had told the family if there were lots of people waiting around, I would just drive through the parking lot and come home. No lines, no waiting...well except for the checkout and like Sam's Club on Tuesday, people were actually nicer than they usually are. The store was reasonably well stocked and with the exception of a couple of things, I was able to get the things on our list, plus a couple of other things that caught my eye as being needed.

I went in got the things that we needed and came home. Was it worth going in...yes, we got some stuff that will make our life a little better in the short and long run, no hoarding, just a few things to get by with. I noticed that most of the other shoppers were doing the same thing, so that was good.

Even so, I don't plan on going in very often over the next few weeks.

Unfortunately, I also have to start moderating all comments on the blog. The trolls and bots have found the blog again and I don't want to give them any kind of public acknowledgement beyond this brief statement letting everyone know that I am moderating comments again.

Other than that today was a puttering day. 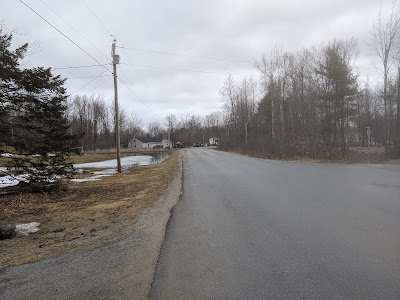 I did get in a nice easy 5.0-mile progression run by doing laps on the road out front. The light rain kept coming and going while I was out there and for the second day in a row, I had one of those wonderful dog encounters. Different neighbor and it stayed out of the road, but still, it startles the hell out of you when a dog comes running at you snarling and growling. I wonder if another one will come out at me tomorrow on my run, sure is getting to be a routine occurrence out here.

The other thing is I am not sure what is going on with my Nike Vomero 14s, when I run in them it feels as though I have to use almost twice as much effort to pick up the pace a little as I do with other shoes in my rotation. 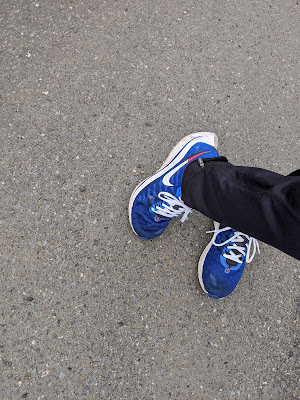 While they are comfortable to run in, it is almost as though the midsole in them doesn't have a lot of snap to them, I wonder if something happened to the Zoom Air? All I know is that I can't blame it on the cold weather since it was right around 40 degrees and that shouldn't have any effect on the midsole performance. I love the Vomero 14s as walking shoes, but as running shoes, I am scratching my head over how they are not working all that great for me.

Enough that I decided to get out an old pair of Hoka Bondi 5s and see if I can get that toe box issue I had with them resolved by using the toe spreader and taping it in place. I did wear them this afternoon and they didn't bother, so we will see. I really want another pair of shoes to rotate in with my ASICS GlideRides, to give a slightly different fit and feel.

Especially since I am not going to bring out my go faster shoes for a while or at least until this Covid 19 stuff slows down enough to where I feel comfortable doing a hard workout. Right now from what I am reading a hard workout does lower your immune system slightly for a while and that is something that I really want to avoid since I am an older runner and statistically in a higher-risk group.

One last thing today would have been Dad's 80th birthday and while I miss him more than anyone will ever know, at the same time I am glad that he passed last October before the Covid-19 came to America. This virus would have been...well he did not have to deal with it and that is a good thing.


This post was written for and first appeared on One Foot In Reality.
daily life lifeisgood RunLog
Hshawjr207
Welcome to One Foot In Reality. This blog will be my daily journal where I get to write about things that interest me like running, technology, aging and a lot about what I do and read about over the course of a day. Some things might be boring, but they are a part of everyone's life, but also the parts that make me go mmmm.

Andy said…
The different platforms have their pluses and minuses. The WP plugin does a great job keeping the trolls' comments from getting posted.
Sometimes I look at some before deleting blocked comments. Just unbelievable crap.
March 20, 2020 at 7:30 AM

Hshawjr207 said…
Yeah, this was one of the big reasons why I left Blogger when I did the last time. The SPAM is a lot worse than on WP, but it is something I can deal with, I am going to give a few weeks, but I will probably have to get rid of anonymous comments at some point, that is where most of the problems are. Yeah, it is mostly copy and paste stuff, but the hatefulness of it is pretty sickening. Plus quite often the poor English makes it pretty evident where it is coming from.
March 20, 2020 at 7:45 AM