Super Tuesday, I got to go vote today, it should be interesting, especially since I changed parties last week. Let's see if I get to vote in my old or new one. I am pretty sure it will be the old one, that is my own fault I waited too long to correct a mistake I made 15 years ago and never got around to checking the boxes again. However, it has saved me from the bazillion robocalls and junk mail that the wife has gotten. 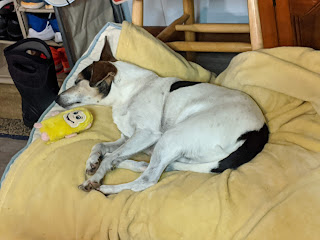 The weather did take a turn for the better and got over 50*F for a while. The yard sure did melt a lot and the yard was certainly muddy, especially given how icy it was first thing. I even had to put the wooden plank down to get across the moat to the steps, first time in my memory that I have done it this early.

.5 - It must of rained overnight, because the driveway was an icy mess at 6:30AM. Even Bennie with 4-paw drive was having trouble standing up on that icy glaze. I had to get out the sand buckets and do the driveway - yet again. It is one of those never-ending stories of winter and our driveway - it needs to be sanded early and often. I gotta find one of those things I can dump the bucket into and then it spreads the sand. It would be a helluva lot easier than putting the bucket on a dolly and using a small trowel to spread the sand on the driveway. Gotta look for one, I have only done this for almost 20 years now.

I drove up to Waterville planned to do an easy 6.0. While the roads were wet between the thawing and melting. It was very close to 40*F when I started so I left my jacket in the truck. It turned out to be the correct choice, I was never really cold and there was just enough of a breeze to keep me nice and cool. 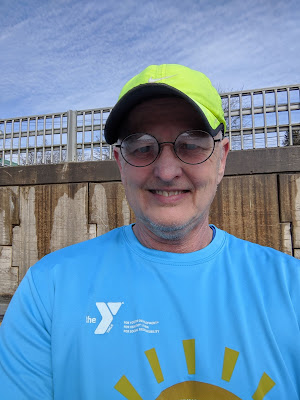 The leg still isn't quite right, it is closer, but still has a ways to go before I go ahead and stretch things out a little more. I did slow down quite a bit after a couple of miles and never really tried to push. Even coming back up Cool Street I was just running comfortably.

I do have to start working on my cadence again, my current 165 is lower than my usual 170 that I have pretty much had over the last few years. Perhaps it is just a bit of laziness on my part or not being in quite the shape I would like to be, but whatever it may be the cadence does need to come up a little more. 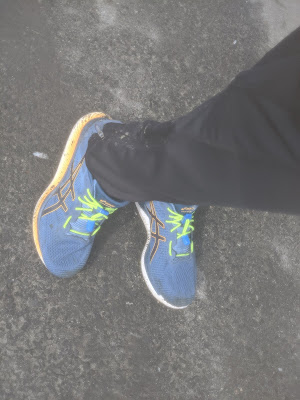 ASICS Glide Ride - They are finally starting to get broken in, although the last couple of miles, I could feel the bottom of my feet complaining a little, so they are not quite there yet. Although I do like the elastic laces better than the stock ones so far.

Overall, a really nice day outside once it warmed up, we are supposed to get a bunch of rain overnight and big winds tomorrow, so we will see how things go with that.

(DIS) INTEGRATION “These things don’t go together. You must be a unified human being, either good or bad. You must diligently work either on your own reasoning or on things out of your control— take great care with the inside and not what’s outside, which is to say, stand with the philosopher, or else with the mob!”—E PICTETUS, DISCOURSES, 3.15.13

For me, I am working on improving and accepting the person that I am, not the person everyone around me expects me to be. I am focusing more and more on the things that I can do or control and letting the other stuff just slide around me like water around a rock.

The little things that used to annoy or disrupt my days, no longer seem to be as important or have as much of a hold over my attention, which is a good thing. Politics, power struggles, people shouting from the rooftops or the divisiveness of today really don't bother me as much.

The more I am finding that I focus on being a better me, the better the world around me seems to be. I can't control what is going with everything and that realization has made my life a better one. I prefer to take the road less travelled and avoid the mob frenzy that taking the other more travelled paths seem to bring into our live.


This post was written for and first appeared on One Foot In Reality.
Hshawjr207
Welcome to One Foot In Reality. This blog will be my daily journal where I get to write about things that interest me like running, technology, aging and a lot about what I do and read about over the course of a day. Some things might be boring, but they are a part of everyone's life, but also the parts that make me go mmmm.