Today was the washing machine from hell. In the morning SD1 overloaded the machine and it decided that it didn't want to do laundry anymore. Three heavyweight fleece blankets were in the machine waiting forlornly for the water to drain and then be spun around. Instead, they were unceremoniously pulled out squeezed and twisted enough so they would not drip on the floors too badly and relegated to deck railings to drip for a while.

Then some oversized or was that undersized bozo went out on the deck and twisted and squeezed a couple of gallons of water out of each blanket and then left them outside in 24*F temps. In the meantime, the washing machine was bailed out twice and finally late in the afternoon on the third try reset itself and did a complete wash cycle.

By that time the three fleece blankets on the deck railings were thoroughly frozen and had icicles hanging off the ends. We ended up redoing each blanket separately and got the final one dried and ready to be put on the bed at about 10:00 PM. That was a long day for that washing machine and the people attempting to put things right.

I will say this though...in this time of worry and whatnot small things like this suddenly do become large things and with patience at an all-time low it is the little things that are sometimes the hard things. If that makes any sense. Yes, a voice or two was raised out of frustration, but when we realized what was happening we lightened things up and just did what was necessary to fix the problem.

1. Don't sweat the small shit, it ain't worth the effort. Stuff is going to happen during this crappy time in our lives, just the way it is going to be.
2. Fix or work on the issues as they arise and keep the voice levels at conversational levels, raising your voices serves no purpose other than to upset the apple cart. Probably the best thing is to not say anything and keep working on the problem or just a gentle reminder, to those who do raise their voices, "we are doing the best we can."
3. People are scared and small things become bigger things way too quickly. Just keep doing the best we can.
4. Do not overload the washing machine. ;-)

Otherwise, it was a nice winter day outside. Yes, it is still winter for a few more days and when the day starts off at 13*F with a little bit of a breeze, it does make it rather chilly outside. 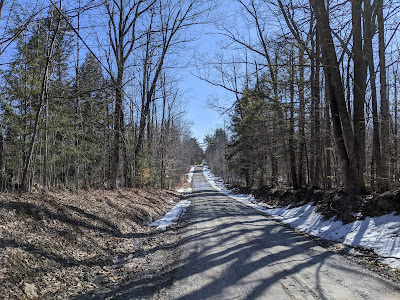 We walked the dogs and I did get to go for a run down-back.

In the evening I got to talk with D2 out in Minnesota and after a while, she seemed to lighten up a little towards the end, like everyone else she is a little scared and concerned about what is happening. I just kept reminding her that we are still better off than many people and that while tough times are ahead of us, that we have to keep working on staying calm, doing the best we can and smile when we can. Life is going to be difficult and it will be different than we are used to for a longer time than people tend to think.

I don't believe that it will get back to how it was just a month ago anytime soon, if ever. We will have different perspectives on life when the Covid-19 pandemic is over. I just hope that most of us live to see the other side of it, because not all of us will. That is just going to be a fact of life, this epidemic is and will kill people and it is going to change how we look at the world.

This is a chance to hit the reset button and see what human beings are doing to their world and what the world can do if given the chance to heal itself. Mother Nature is a very uncompromising sort and maybe this is her way of giving us a warning. That if we do not heed, we do so at our species' own peril.


This post was written for and first appeared on One Foot In Reality.
CV-19 daily life lifeisgood
Hshawjr207
Welcome to One Foot In Reality. This blog will be my daily journal where I get to write about things that interest me like running, technology, aging and a lot about what I do and read about over the course of a day. Some things might be boring, but they are a part of everyone's life, but also the parts that make me go mmmm.

Andy said…
When you see the satellite photos of China with no plumes of pollution it makes you think mother nature is fighting back.
I'm in your area code today. My mom is at Penn Bay and I'm waiting for visiting hours to start at 11am. She's 91 so every thing has the potential to be serious, but stable now.
March 18, 2020 at 9:46 AM