on March 21, 2020
Today's run was in the bright sunshine, but with the breeze out of the North and temps in the '30s, let's just say it wasn't the warmest run.

I did think about running down-back just as a change of scenery and walked with Bennie down there this morning. For the most part, it wasn't too bad, but coming back up out there, it was starting to melt a little and getting gushy, so I decided to just do laps in front of the house. 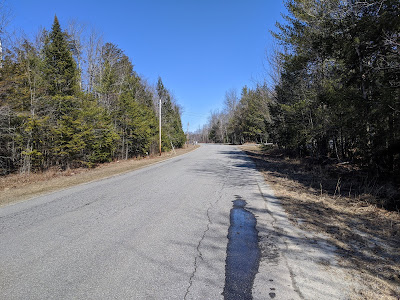 I really am not crazy about doing laps, but it is better than sitting inside doing nothing. On the first lap, a strange car was coming out of the driveway and SD2 who was walking Hunter said he had been putzing around in the yard for a few minutes and put something on the steps. When he drove by it was a car from Virginia and we had zero ideas who the driver was.

So I stopped running and went up into the yard to see what was up. It was political propaganda for a Congress critter wannabe in our area. Not really a smart thing to be leaving shit on people's steps during this kind of pandemic when the virus can be spread by doing something like that. Needless to say that I won't be voting for that candidate. Plus using out of state talent to deliver your message to a possible constituent doesn't seem the brightest move in my book.

After fuming about that for a minute or two, I got back on the road, but my motivation to run was pretty screwed up by that crap. The car was still wandering around the neighborhood when I was getting towards the top of the hill and I did manage to flag down the driver and ask him what in tarnation he was doing?

He just said he was delivering stuff as directed using his GPS to go to the houses he was supposed to. I said it was a pretty shitty time to be going to people's homes like that and leaving stuff that people would have to treat like BioHazard material. I told him to take my address off his delivery route for future reference and he drove off in a bit of a huff. I don't think he liked me all that much. Oh well, stoopid is as stoopid does and delivering campaign propaganda like that just seems an unnecessary thing in light of today's reality and how the Covid-19 virus can be transmitted to others.

Needless to say after that little meeting, I was not really all that into running and it showed on my third split time. I decided to force myself to do one more lap and called it quits.

Physically I felt fine, the GlideRides did what they were supposed to do and it was just the mental part of the run that shut me down today. Could I or should I have run another mile or two? Yeah, however that whole thing with the political propaganda just took me off my game a little. Something like this would not have been a big deal even a week ago, but now when somebody, unnecessarily invades our little piece of this little blue marble, it does tend to send my protective antennae up to the full alert. Just the way things are going to work for a while.

At least I got 4.0 miles in and continue to like the GlideRides.


This post was written for and first appeared on One Foot In Reality.
RunLog
Hshawjr207
Welcome to One Foot In Reality. This blog will be my daily journal where I get to write about things that interest me like running, technology, aging and a lot about what I do and read about over the course of a day. Some things might be boring, but they are a part of everyone's life, but also the parts that make me go mmmm.

Kay said…
No kidding! We have one representative here in Hawaii who went to Vegas and came back not feeling well. He says he was just playing slot machines so he figured he was safe. He got himself tested and then WENT TO WORK for two days at the capitol until he got the positive test results. Now the capitol is shut down. How irresponsible could he be?
March 21, 2020 at 4:33 PM

Hshawjr207 said…
That is so crazy, but people do not believe that they could possibly be the ones to spread a virus or anything else. Especially when they do not feel sick in any way. That is the biggest danger of the Covid-19 many people do not have any symptoms, but they are spreading the disease by going about what they normally do. Sad.
March 21, 2020 at 7:16 PM

Andy said…
This is still remote from most of us and most of us can't imagine that it will happen to us or that we could be a carrier.
I'm even beginning to hear the conspiracy and civil liberties folks pipe up. The big brother, not letting anyone tell me what to do people are popping up.
These people will endanger us all. It's time to listen to people like Dr. Fauci and be good citizens.
March 22, 2020 at 8:00 AM