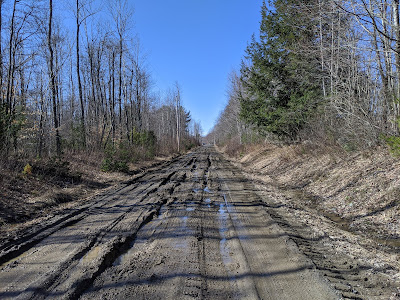 Then I got this wild-haired idea about running into Augusta and having Mary pick me up at the Water Works on Leighton - it was a great idea, I wouldn't meet anyone and well...Mary reminded me we ARE in a no non-essential travel and while running might be okay, her traveling to go get my sorry arse after running to Augusta is not essential. I didn't argue and simply said I'll do laps out heah. :-)
This afternoon during Bennie's last walk, his arch-nemesis - Hazel was being walked in the other direction. He went into Big Dog Bennie mode and somehow the back of his harness came undone. He was going to slip out of the harness, so I did the drop and tackle him before he became a mini Cujo and then have Hazel have him for supper 50-pound dog vs 25-pound dog is not much of a contest. I grabbed him and held on until I got the harness back together. All while he was barking and squirming to get at Hazel. Dumb dog. Always something to get the heart rate up a little higher. The neighbor did a great job of keeping Hazel on the other side of the road, that wouldn't have been fun if she had gotten close while I was getting Bennie back in his harness.
Tomorrow is going to be one of those spring snowstorms that everyone just loves so much, we are right on the cusp of the 3-6 inch line, so we will probably get 8-10 inches of white shite. Lots of fun, but I ain't getting the snowblower out of the back of the garage and will probably have to play with the snow scoop a bit on Friday. I just LUV frigging spring snowstorms.
Chores
I did some yard work spreading out the woodchips that we chipped up the other day and then went over to SD2's yard and kind of smoothed out the bank by where she parks her vehicle. The landscaper didn't get a chance to fix the tread marks from the bulldozer before the first snow came and they needed to be done before the ground setup again this spring. Not fun and I could only get about 80% of it done. The bottom part was still too muddy and I was sinking above my ankles. Hell, I almost lost my boot a couple of times when it got sucked into the mud.
What was I thinking?
Another good day where I did what I wanted during the run and while the yard work was a bit strenuous for a chicken winged kind of runner dude, I managed to get through using the shovel and hoe to smooth out that bank.
I am ready to run somewhere else other than Sidney, but I also know that the Stay-At-Home order is necessary to slow down the spread of the pandemic, so while I might grouse and whine about having to run out in front of the house, I can't complain. I am getting to run and that is the important thing.
I have a feeling that it might be this way for quite a while longer.
Hshawjr207
Welcome to One Foot In Reality. This blog will be my daily journal where I get to write about things that interest me like running, technology, aging and a lot about what I do and read about over the course of a day. Some things might be boring, but they are a part of everyone's life, but also the parts that make me go mmmm.