on April 26, 2020
The Good?
I got to run for the 15th day in a row. Not a long streak, but one that is keeping things interesting, but it could be in danger with tomorrow's expected storm of 2-5 inches of white shite. We will see. :-) 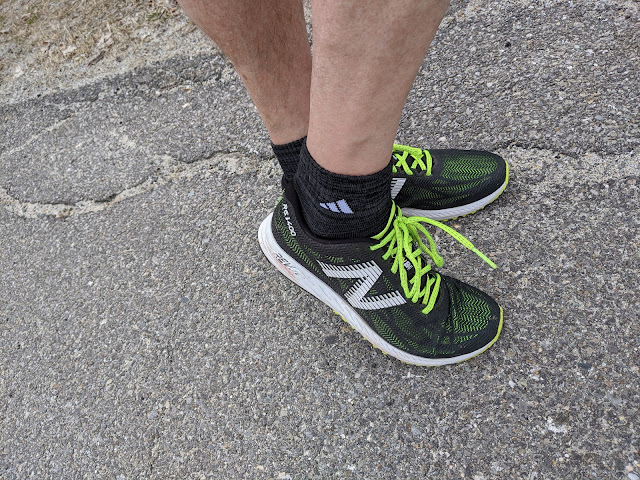 Since I ran in the New Balance 1400 v6 I focused more on my form and did not really worry about the pace. I know they are supposed to be racing flats, but as long as I pay attention to my form and don't pound my heels, I can use them more as light-weight trainers than simply racing flats. I did run the course about 20 seconds faster per mile than the last time I ran this course on Monday, without trying too hard to go faster, so the shoes do make a difference. Or should I say the weight of the shoes make a huge difference, especially that last mile.
Mile Splits
1.0 - 8:47 / I purposely started off slow, since I forgot to do my warm-up routine and then picked it up going down the hill.
2.0 - 8:37 / Feeling pretty good, I had originally thought about doing a time trial on the Shepard Road, but the left hamstring was a little grouchy and there was a headwind, so I decided to just plug along comfortably.
3.0 - 8:53 / Holy traffic. From the top of the hill to Blake, I thought it was the middle of summer and everyone was coming home from church, transfer station, or headed to the lake or something. The traffic for a state under stay at home orders was pretty damn busy.
4.0 - 9:01 / The 1400v6 did great on the dry dirt road down-back and I even managed to pick up my feet a few times to go a little faster than I usually do on the dirt road.
5.0 - 9:25 / A lot better than the over 10:00 from Monday, but still not where I want to be, but for the effort level, it was not too bad.
The Bad?
The traffic on the Middle Road was just too damn busy and I spent a whole lot of time on the dirt shoulder, which the 1400s did a great job with.
I had to do an upper body workout this afternoon, our 19-year-old wood chipper finally wouldn't start and it has a wire hanging loose off the on/off switch and I have a feeling it also needs a carb rebuild. This meant that one of the brush piles on the side of the lawn had to be dragged off to a larger brush pile in the back 40 where the wife won't notice them quite so much and can wait there patiently until we can get the chipper repaired or replaced. Dragging brush piles from place to another is a form of insanity, but needed to be done. Happy wife, happy life.
What Was I Thinking?
The run was good and while I was running I decided to do the 50+ mile review of the 1400v6 at some point this week. I know it is not one of the newest and greatest super shoes, but it is an understated and great performing shoe that is more versatile than many of the so-called super shoes are.
Also, the President of our running club sent me an email asking me to write an article for the next newsletter, so it gives me a deadline and something to actually think about. :-)
Not a really busy day, but I still managed to get almost 25,000 steps in and a pretty good nap.
This post was written for and first appeared on One Foot In Reality.
RunLog
Hshawjr207
Welcome to One Foot In Reality. This blog will be my daily journal where I get to write about things that interest me like running, technology, aging and a lot about what I do and read about over the course of a day. Some things might be boring, but they are a part of everyone's life, but also the parts that make me go mmmm.