on April 01, 2020
The Good?
It wasn't raining...well not much anyway, but the little snow squalls that came through could be a bit nasty and left the road a little wet in spots. The run itself was more about doing the work and getting the miles in while doing laps in front of the house. Luckily where I live the views are pretty decent, so doing laps is not the end of the world, but at the same time, it does get a bit repetitive. However, it is better than having to run on a treadmill 100% of the time.
Although at times I sort of wished that I had one to play on today. I don't mind running on treadmills when the weather is cold, windy and rather nasty outside. I just have to keep looking on the positive side of things and be thankful that I can still run at all outside. 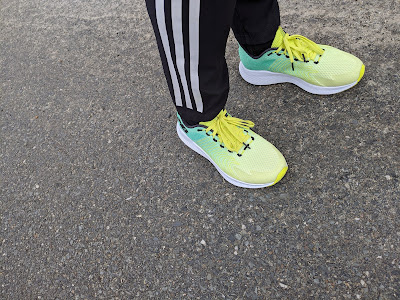 I decided to run in my New Balance Propel size 8.0 2E that I got for Christmas and the shoes actually did great, except for one thing.
Ankle well annoyance.
It is a problem that I have quite often with New Balance, Skechers, and Reebok shoes - the ankle wells are just a bit too high and while I hope that they will not actually cause any blisters, there is not that put them on forget they are there feeling I want from my running shoes. It is more like, I am always waiting for my ankles to go from a slightly uncomfortable feeling to a hotspot to a blister. Which we all agree does suck.
Luckily today, for the 10K I ran today there were no blisters or hotspots and the ankles just were annoyed with the way the shoes felt against them. I guess that is good and bad.
The Bad?
The wind was blowing pretty much right down my road and made it a wind tunnel for resistance exercise. Yes, getting those spots of moisture on my glasses made vision questing, Errr running a bit more interesting about finding the potholes that are forming in the tar and then avoiding them.
Traffic was up because it was the 1st and a lot of people who have been staying off the road got checks and were able to go out to attempt to find groceries. One of the neighbors told me (from a safe distance) that the local store was mobbed between people re-supplying and also attempting to get to the store before tomorrow's new restrictions on the numbers of customers that stores may allow in at one time go into effect. Still no TP in stock she said.
What was I thinking?
After talking with the neighbor, Mary and I decided that neither of us should go into town tomorrow and that what we have can get us through to next week. We had been discussing the pros and cons of having her or I go into Shaw's tomorrow morning during their elder hours. Based on the idea that it seems that men are more likely to have serious complications or die from COVID 19, we finally decided that if anyone should go it would be Mary again. It is hard to argue with your spouse when both of us are attempting to keep the other one safe. :)
Back to the running shoe conundrum.
While I love the feel when running and everything about the Propels, but the ankle wells, I can see that area becoming a problem if I run too much further or too often in them.
So I dug into the back of the garage and pulled out a pair of Hoka Clifton 6s that I have been saving for a rainy day, well actually I had hoped that I could save them until sometime in May and will add them to my rotation instead of the Propels. Which really does suck, but I am not going to run a lot in shoes that may cause blisters at some point, when I least expect or want them too.
We will see how the C6s do. At least I still have the ASICS GlideRide that works just fine, but I am attempting to make them last a little longer versus running most days in them.
Not a great day, but another day in a life well-lived. 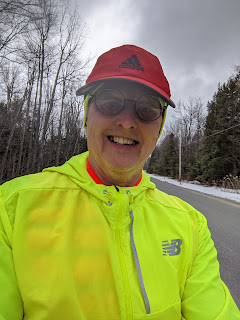