on April 22, 2020
The Good?
Today would normally be a day that I would run at the gym for reasons in The Bad section of this post, but instead, I actually did run 5.0 miles outside and while it was cold with the wind chills it was not a bad run.
I have been doing a LOT of thinking lately about my running shoe rotation and how I want to use the shoes I have in the house already. So I dug out my New Balance 1400v6's to see how they would do on this blustery and chilly day going through the dirt road down-back.
No issues at all.
Even though they do not have the cushioning of other shoes in my rotation they did everything that I wanted on this run. The one thing that I will say is that while wearing them today I did have to focus more on my form when running slower, than just plodding along in more cushioned trainers. Which probably a good thing. Also, I had forgotten how much I enjoy running in the 1400v6's - they are just a very nice running shoe and ones that I can run in more than just going faster. 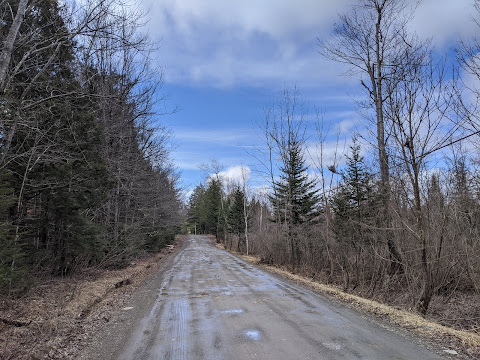 The temps according to my weather app were 26*F with a wind chill down in the low teens, with a blustery 15-25 mph breeze out of the west. The first mile was getting reacquainted with the 1400s and then it was a matter of keeping to a steady effort without attempting to pick up the pace - which I felt like I really wanted to do more than a couple of times. I did meet one other person out walking and he was all bundled up like it was winter again. As we passed we commiserated about the cold. ;-)
1 - 8:32
2 - 8:43
3 - 8:41
4 - 8:53
5 - 9:19
I thought about doing one more mile but by the time I got back to the house, I was just cold and wanted to get my cool-down walk done and over with. I did notice that wearing my cold-weather gear was a great idea, but the effort level of having it on after not needing it for almost a month did make me work a little harder than I expected. Especially wearing the windproof running pants.
A good run and probably better for me than it would have been on the treadmill which would have been my choice under other circumstances than us being in the middle of a pandemic and the gym closed.
The Bad?
I had to dig out my winter running gear this morning!!! For goodness sakes, it is April 22nd and I need to dress more like it is February 22nd. Not really what I enjoy, but if I want to run that is what is being done. I mean all the puddles from yesterday's rainstorm were still frozen over when I ran - not cool.
What Was I Thinking?
Pretty much that I like the 1400v6's a LOT and will be running in them a lot more regularly.
That I am not enjoying our fine spring, errrr winter-like weather all that much. Especially, the parts when I see white shite falling from the sky every so often throughout the day.
While I am reading more and I have to slow down on the FOMO social media crap again. It is just that there is so much going on with the pandemic and politics of the day being such shit shows that I want to keep up with the latest developments even though things really are not all that different than they were a month ago. I just don't believe there is much chance of things getting better in the near-term and I fully expect it to get a LOT worse - which sucks. Especially, with our Federal leadership talking out of both sides of their mouths versus providing us with one voice and one set of actions.
The only question that remains to be answered what number of deaths is going to be acceptable to this administration and you know something I don't think they really know and won't know until this virus really hits the states with conservative Republican governors or if it starts to get into their base supporters. That will answer a lot of questions.
This post was written for and first appeared on One Foot In Reality.
RunLog
Hshawjr207
Welcome to One Foot In Reality. This blog will be my daily journal where I get to write about things that interest me like running, technology, aging and a lot about what I do and read about over the course of a day. Some things might be boring, but they are a part of everyone's life, but also the parts that make me go mmmm.