Yep - It Sure Did Snow

on April 10, 2020
I got the generator hooked up to our cable, Internet, TV and it didn’t even bog down at all, so I can write a blog post. 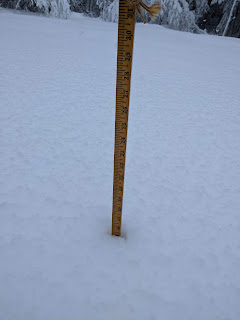 Well, that 3-6 inch we had forecasted for our area, sure didn’t come true!!! Instead, we got over 15 inches of the white shite, otherwise known as snow. 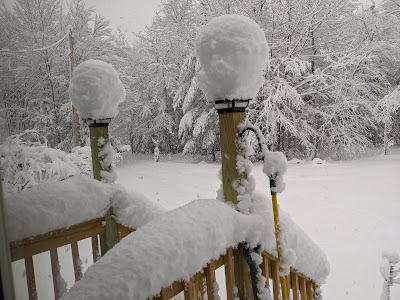 It just kept coming down and I figured that we would lose power and around 8:30 PM or so, it went out. No biggie we just went to bed and figured that at some point it would be back on. At about 5:00 AM the house powered up for a bit, so I shut off the lights and stuff, then when back to sleep. The house had gotten down to 54*F, so it was a bit chilly, but the furnace was running quite nicely.


I did notice that it was still snowing pretty good though...little did I realize.


We woke up again around 7:00, Bennie was uncomfortable because the snow was moving on the roof and plopping onto the ground. We also noticed that the power was out again. Not a good sign. It was still snowing - hard and the tops of the vehicles were pretty well covered and the top of the birch trees in the yard was touching or almost touching the ground. Really, not good. 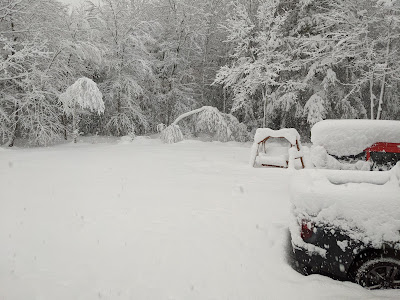 When I went out for Bennie’s first walk, it seemed like we had 16-18 inches of snow in the driveway and just getting down to the road was a bit of a struggle. Once out on the road, it wasn’t too bad, but it was still snowing heavy, nasty white shite. The newest neighbor was out attempting to snow blow his yard, but his snowblower was not quite up to the task, it was one of those little ones and it kept clogging on him. That wet, heavy snow that my Dad always called heart attack snow. 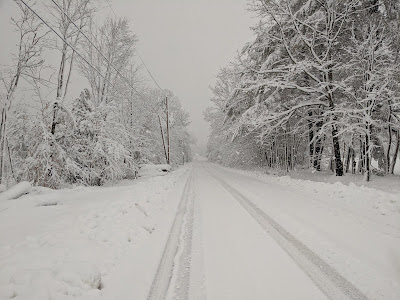 We walked to the top of the hill and on the way back I noticed that the tree was laying against the power line and the next two poles up from the neighbor’s house they were laying on the ground. Not really what I wanted to see at that point. I knew then we weren’t going to get power back for a couple of days. 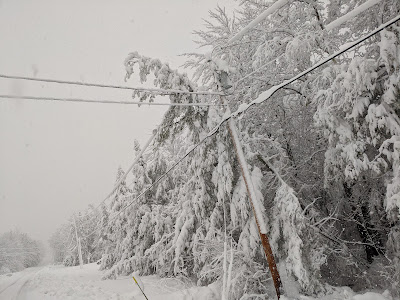 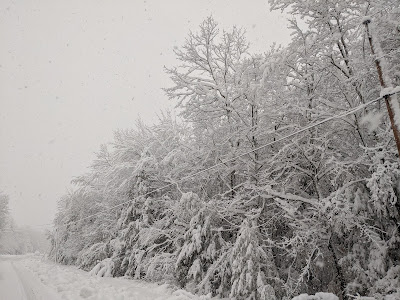 
We got back and struggled back up the driveway. Mary had cleaned off the steps and we all went inside to eat a cold breakfast. 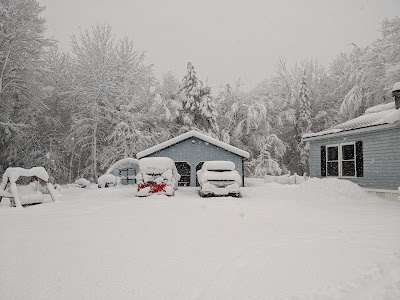 After breakfast, I attempted to start the snowblower. For some reason it would not start, I kept pushing the button and nothing happened. Err Harold, you really are a dumbshit sometimes. No power means no electric start. You have to use mechanical the pull-start to get it going. Once I figured that slight issue out, the snowblower started pretty quickly and for the next 2-3 hours, I bounced around, tugged, pulled and swore at the damn white shite.


This was not one of those get out the door, do the snow blowing a come back in feeling like you can keep going. I was pretty much exhausted by that point. The old Husqvarna Snowblower is a huge time saver, but it is also a beast and in this kind of snow, it is more than an upper body workout to use it.


After getting the snow blowing done, I had to sit down for a few minutes to get back a little energy. I went out to the garage to get the generator going. I could hear some worrisome noises inside the garage and with 15+ inches of wet, heavy white shite sitting on the garage roof, I figured that I needed to pull off as much of that stuff as possible, so I headed back out to do roof raking, the generator could wait a bit longer.


An hour later the garage had a mohawk cut and I felt a lot better about the amount of white shite on the roof and the garage had stopped making those ominous noises. 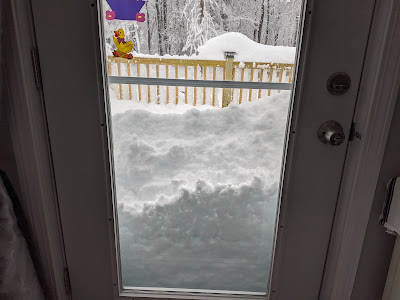 The generator fired up, so of course, I screwed up the fuel feed and shut it off instead of opening it up and then had to troubleshoot to figure out why the generator suddenly stopped working. I was getting tired by this point and the old noggin wasn’t firing on all cylinders. Finally, I saw that I turned off the fuel and when I turned the switch suddenly the generator started right up and ran just fine. Imagine that!!!!


So the refrigerator, freezer, coffee maker and a few lights are working, recharging phones and computers, so the stuff I worry about the most are okay. We have a wood stove, so heat is not an issue. Which means for the most part we are going to be just fine.


I might even experiment to see if the generator can handle adding on cable and the router, so we can have the Internet and TV (that would be nice, but not a big deal if it doesn’t work). It did work!!!


I can safely say that the weather forecasters blew this one pretty badly - that 3-6 inches of white shite, turned into 15+ of white shite and caused a lot of damage to the powerlines around us. So I imagine that sometime next week we will get power back and anything quicker than that will be a welcome surprise. Especially with all the COVID-19 stuff going on around us. 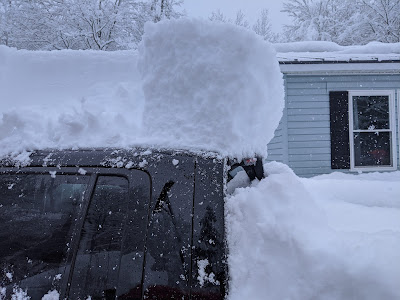 We will survive this too, it is just a check of our resolve and I have a feeling, that we might want to check into a generator that can do the whole house at some point fairly soon. We seem to lose power a bit too often and the older we get the more of an inconvenience it becomes, versus being an adventure.
reflection
Hshawjr207
Welcome to One Foot In Reality. This blog will be my daily journal where I get to write about things that interest me like running, technology, aging and a lot about what I do and read about over the course of a day. Some things might be boring, but they are a part of everyone's life, but also the parts that make me go mmmm.

CheerfulMonk said…
It sounds like getting a bigger generator would be a good ides. Fingers crossed for you!
April 10, 2020 at 4:00 PM

Andy said…
Yikes! My brother, who lives north of Bangor, did say he hoped that the plow guy still had the plow on his truck.
Here in Boston we got rain and wind. That was bad enough.
April 11, 2020 at 12:55 PM