on May 02, 2020
The Good?
It was a nice steady rain with the temps in the '50s so it was not all that bad. I don't mind running in the rain in those conditions most of the time and since it was a recovery day, I was just going for an easy effort and getting the miles in. Mission accomplished.
I even ran in my old Nike Wildhorse 5s and they did everything I wanted and the best thing was that I stayed upright the entire way, even though I did hit some pretty good mud a couple of times. 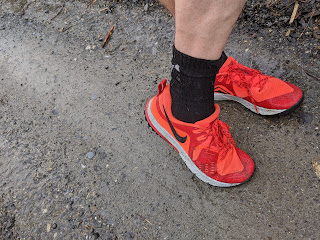 The other thing is that back a few weeks, I had an opportunity for a fantastic deal on a pair of Skechers Razor 3, but the company cancelled the order because they said it was out of stock. So I got another not quite as good a deal on the Razor 3s from a different company after I received the cancellation notice and have had a couple of really excellent runs in my new Razor 3s this week.
A couple of days ago, I got notice that the first company was now shipping me the first pair that I thought had been cancelled and got them today. The exceptional deal was still exceptional, but it was kind of a mixed-upped the way that they cancelled and then uncancelled the order then shipped the shoes without asking me if I was still interested. 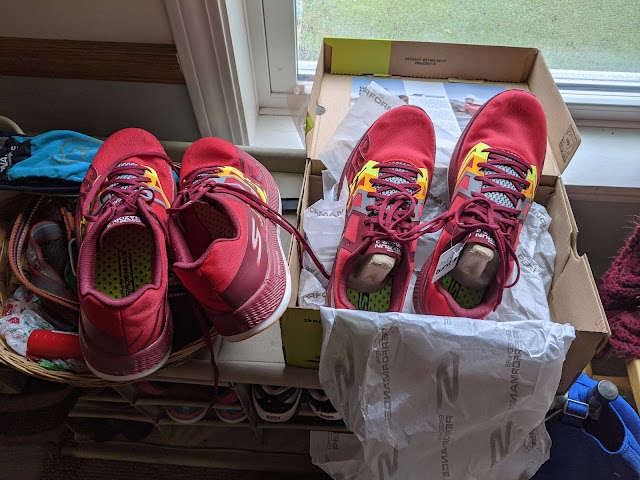 I am going to keep the Razor 3s at that price, I got two pairs of a great shoe for significantly less than I would have paid retail for one. So while I might spit and huff a little about what they did, I am not really upset about having two pair of Razor 3s in the house.
The Bad?
It was bad enough down-back while walking Bennie for his long walk in the rain (we turned around at the half-mile mark), that I decided that I needed the extra grip that my trail shoes provided. The first time this spring that I decided to run Errr play down-back in the mud. It was a slog and a lot of weaving around the puddles and small rivers in the roadway.
Being cooped up in the house most of the day was one of those things you just deal with, reading looking around online at Facebook and Twitter way too much and continuing to clench my teeth at the happenings of the day or just going WTFO that things really do not make sense anymore other than it is all about power and who has it and how most of us are just numbers or percentages who are will be sacrificed as pawns in the games of power as usual.
What Was I Thinking?
It was just one of those rainy days where you get outside and just do it. Once I got out and got going I was fine, it was more just getting out the door than anything else.
I find myself thinking too much and not doing enough on rainy days. Oh well things will get better and I will be around to see those better times - at least that is the plan as long as I can keep the Grim Reaper chuckling enough to ignore me for a while longer. :-)
This post was written for and first appeared on One Foot In Reality.
RunLog
Hshawjr207
Welcome to One Foot In Reality. This blog will be my daily journal where I get to write about things that interest me like running, technology, aging and a lot about what I do and read about over the course of a day. Some things might be boring, but they are a part of everyone's life, but also the parts that make me go mmmm.

Do you have to run in a mask?
I know you are in a more rural area and social distancing is probably easier to do.

Starting this Wednesday we have to wear a mask in public in case we can't always "social distance."

I've run in to Cambridge twice and it's impossible to "social distance" the entire way, so I've been wearing a neck gaiter (sp?).
Hot as hell especially in the sun.

I wear an N95 mask when I go to the store and it makes me break into a sweat. Not good when you're standing in a line!

Hshawjr207 said…
Hi Andy - Not out in the rural area I am in not enough people out here, so social distancing is pretty easy. If I was running in town, I probably would just as a courtesy to others, we have a few options. Mary's girls bought us some fabric masks, she has made a couple and I did order lightweight neck gaiter just for that purpose. However, the wife is adamant that we stay on the little hill where we live as much as possible, so I have been good.

Supposedly the N95 mask with a valve doesn't work for this purpose, because it allows you to breath out. I have both styles of n95s from a painting project from almost 20 years ago when I spray can painted my old red jeep. I wear the one without the valve when I go into town and use the other one for when I am playing with nasty stuff around the house (like tearing old fiberglass insulation with lots of mouse droppings in it - out of the garage after over 30 years in place = nasty work).

Glad you are still doing good and after this stuff has calmed down would like to make a point of sitting down with you and having coffee some afternoon. We have only been yakking for a 8 years or so and need to shake hands.
May 3, 2020 at 1:56 PM